Only weeks before her forty-second birthday, Anne of Cleves died at the manor of Chelsea on 16 July 1557. The second daughter of Duke William of Cleves, Anne had famously been queen of England for only six months, from January to July 1540. She had spent the remaining seventeen years of her life residing at one of her many properties, which included Richmond, Bletchingley and Hever Castle, the childhood home of her predecessor Anne Boleyn. Anne's final years were marked by obscurity, so much so that we cannot be sure of the cause of her death.

In popular culture, Anne continues to be thought of as the 'Flanders mare', the ugliest of Henry VIII's wives. However, contemporary evidence indicates that she was a beautiful, charming and pleasant young woman, rather than a frumpy, unattractive and dull matron. Even the French ambassador, who wrote disparagingly of her costume and manners, reported that she possessed 'middling beauty' and was 'of very assured and resolute countenance'. She was reputed to be kind, sweet-natured and polite, qualities which were borne out by the care she showed towards her stepdaughter Elizabeth Tudor and the interest she took in her servants' lives. Indeed, so popular was Anne as queen that an ambassador at court spoke of the widespread regret felt among her subjects that they were to lose 'the sweetest, most gracious and kindest queen they ever had or would desire'.

Although nowadays Anne of Cleves is regarded as the luckiest of Henry's unfortunate queens, she might not have agreed with this verdict herself. It is clear that she regarded the annulment of her marriage with humiliation and shame, and on more than one occasion she attempted to persuade the king to consider remarrying her. In the wake of Katherine Howard's downfall, Anne and her brother, the duke of Cleves, unsuccessfully pressed Henry to remarry her. She greeted Henry's final marriage to Katherine Parr with disapproval, and became depressed when the king did not communicate with her. Henry continued to treat her kindly, and the two appear to have enjoyed a warm relationship following their failed marriage. He subsequently granted her three manors in Kent (Kemsing, Seal and Hever) and continued to assist her financially. She was welcomed at court in 1543 and 1546, but following her former husband's death she desired to return home to Cleves. 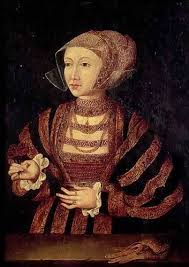 Anne continued to feature in important public ceremonies, including the coronation of her former stepdaughter Mary Tudor in the autumn of 1553. However, her later life was marked by hardship and conflict with the government. Edward VI's Privy Council confiscated several of her properties, and an unpleasant household dispute between her servants reached the attention of her powerful brother. It is also possible that her previously close relationship with Queen Mary was damaged by Anne's rumoured involvement in Wyatt's Rebellion in 1554. The Imperial ambassador alleged that Anne 'was of the plot and intrigued with the Duke of Cleves to obtain help for Elizabeth', and whether or not this was true, the former queen was never again invited to court after 1554. Alternatively, this may have been because of Anne's failing health. She spent the last stage of her life at the manor of Chelsea, the former residence of her successor Katherine Parr. She bequeathed her jewellery to her former stepdaughters Mary and Elizabeth. On 4 August Anne was buried at Westminster Abbey, the only consort of Henry VIII to be interred there.

Anne was praised by Thomas Becon for her 'accustomed gentleness', while the chronicler Holinshed described her as 'a ladie of right commendable regards, courteous, gentle, a good housekeeper and verie bountifull to hir seruants'. Although she spent most of her life following the annulment of her marriage as a private person, she would have preferred to be remembered as queen of England, however briefly she occupied that position.
Posted by Conor at 03:06