We have no way of knowing whether Anne Boleyn was greeted by warm sunshine and birdsong as she took her final steps out of the queen's apartments and towards the scaffold within the Tower of London. Likewise, it is impossible to say whether the queen and her attendants were showered with rain, or whether blustery winds tugged on the trains of their gowns. Films and television often portray Anne's execution day as beautifully sunny and warm (think Anne of the Thousand Days; The Tudors; Henry VIII, etc.), but contemporary writers writing about that momentous day were uninterested in the finer details of the weather, and it is questionable whether Anne Boleyn herself was all too concerned if her final moments were spent in brilliant May sunshine or unseasonable damp and cold. 19 May 1536 was the date on which an unprecedented act would take place: the execution of an English queen consort, the first of its kind.

Four days earlier, she had been tried and found guilty of adultery with five courtiers, treason and plotting the death of her husband, Henry VIII. Two days later, her marriage had been annulled (probably on the grounds of her sister Mary's liaison with the king a decade earlier) and her co-accused had themselves gone to the scaffold, including her brother George, lord Rochford. Anne's tortuous imprisonment in the Tower had been, understandably, emotionally charged for her: she had experienced hope, despair, confusion, sorrow, anxiety and humour. Sir William Kingston, the constable of the Tower, had been baffled by her behaviour: one minute she seemed ready and willing to die, he reported, but the next minute she would collapse in a fit of weeping. Archbishop Cranmer, who had received patronage and support from Anne and her family, had provided Anne with hope that she would be permitted to spend the rest of her life in a nunnery, but that hope was nothing more than a cruel illusion. As May 19 dawned, the queen was aware that her life would indeed end within the walls of the Tower, rather than behind the walls of a nunnery, but at least her death would be caused by decapitation, a relatively quick form of execution, rather than by being burned at the stake, as was originally feared.

According to Edward Hall, the lawyer and chronicler, Anne spoke these words on the scaffold:

Good Christen people, I am come hether to dye, for accordyng to the lawe and by the lawe I am iudged to dye, and therefore I wyll speake nothyng against it. I am come hether to accuse no man, nor to speake any thyng of that wherof I am accused and condempned to dye, but I pray God saue the king and send him long to reigne ouer you, for a gentler nor a more mercyfull prince was there neuer: and to me he was euer a good, a gentle, & soueraigne lorde. And if any persone wil medle of my cause, I require them to iudge the best. And thus I take my leue of the worlde and of you all, and I heartely desyre you all to pray for me. O lorde haue mercy on me, to God I comende my soule.

Mercifully, Anne's head was swiftly 'stryken of with the sworde', and she was buried at the chapel of St. Peter ad Vincula. Modern readers might wonder whether Anne's last words in praise of her husband were spoken with irony, or contempt, or humour: but her speech actually followed contemporary protocol in almost every sense. The condemned was expected to praise the king and the justice of his law; to speak out against it threatened infamy and ruin to the condemned's family, and might result in an even harsher mode of execution for the condemned. Whether or not Anne was thinking of her daughter, the infant Elizabeth, when she spoke these words is uncertain, but it is possible that she was desirous of securing as stable a future as possible for her soon-to-be motherless, bastardised daughter. Criticising Henry or questioning his justice in public would hardly achieve that. In asking those present to judge the best of her case, however, Anne left the events of her ruin open to question and open to debate.

The unexpected accession of her daughter, Elizabeth, in 1558 meant that Anne's memory could be honoured and her status as queen of England celebrated, but had it not been for Elizabeth's accession, it is possible that Anne would have been confined to history as an unpopular and possibly adulterous queen. Her name was rarely spoken, at least in public, during the reigns of Henry VIII and Edward VI, and Mary I, who understandably blamed Anne for her harsh treatment during the 1530s, openly referred to Anne as an adulteress and heretic, and was desirous of preventing her half-sister Elizabeth from succeeding her. Even during Elizabeth's reign, moreover, a degree of ambivalence remained. Protestant writers, including John Foxe, dutifully celebrated Anne's piety and charity, but they refrained from discussing the events that led to her downfall and execution. To do so, perhaps, would cast doubt on Henry VIII's motives. Elizabeth herself, who gloried in her father's memory, rarely referred to her mother and, unlike her half-sister Mary (who had proclaimed her parents' marriage to be valid upon her succession to the throne in 1553), Elizabeth did not legitimise herself and did not declare her parents' union to be valid. In doing so, she left herself vulnerable to accusations of bastardy for the rest of her reign, and in Catholic Europe, her cousin Mary Queen of Scots was always regarded as the rightful queen of England, by virtue of both her unquestioned legitimacy and her Catholic faith.

Why Elizabeth did not restore the legitimacy of her parents' marriage is understandable: her father had approved the dissolution of his marriage to her mother and had sanctioned her subsequent execution on charges of treason and adultery, charges that called into question Elizabeth's parentage. To have retrospectively declared the marriage to be lawful, rather than null and void, would have effectively cast Henry VIII as a murderer. As mentioned earlier, Elizabeth fondly recalled her father's memory on several occasions during her reign, including at her coronation festivities. Her relative silence concerning her mother need not be taken as evidence that she was ashamed of her, for there is other evidence to suggest that, privately at least, she honoured her mother's memory. Moreover, the likes of Foxe probably encouraged Elizabeth to view Anne Boleyn, correctly or otherwise, as an important patron and supporter of the Protestant faith, a faith with which Elizabeth identified with increasing militancy as her reign saw the introduction of gradually harsher measures against Catholics.

The silence that followed Anne Boleyn's death well into the reign of Elizabeth stands in stark contrast to today: as Susan Bordo notes, in modern times Anne is undoubtedly the most famous of Henry's wives. Countless biographies, novels, films, television dramas and documentaries are produced about her every year. She has been portrayed in virtually every guise, from revolutionary reformer to hapless victim, from scheming adulteress to feminist icon, from deformed witch to courageous intellectual. Everything about her is debated: her date of birth, her hair colour, her facial features, her religious opinions, her character, her sexual life, her relations with her siblings, her political activities, her relationship with Henry VIII and, most explicitly, the reasons for her downfall. She continues to make the headlines in newspapers, as witnessed recently with newfound theories about her portraiture. There is an insatiable lust and desire for all things Anne Boleyn.

I recommend Susan Bordo's original and fascinating book, The Creation of Anne Boleyn, for an engaging analysis of Anne's status as an icon and her legacy, a legacy that transcended her brutal and bloody death in May 1536. Bordo also makes the important point - and one worth remembering - that "Anne Boleyn", in her many cultural guises, has by now largely overshadowed the historical remnants of the real Anne Boleyn. With so little documentary evidence for the historical figure - as noted earlier, even her date of birth is open to question - it is no wonder that historians, novelists and filmmakers alike delight in using their imaginations to fill in the gaps. It is the scarcity of surviving records that account for why Anne is such a polarising figure and why she has been portrayed in virtually every guise imaginable, even those of vampire and prophetess.
Posted by Conor at 02:58 No comments: 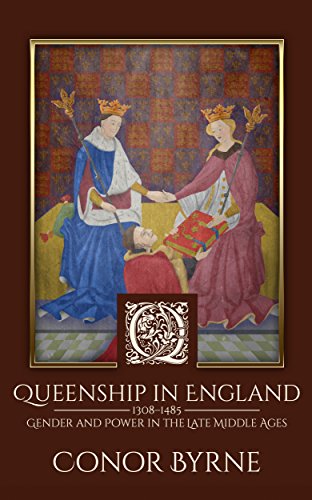 *Exciting Opportunity* If you own a Kindle, today and tomorrow, you can buy my book Queenship in England 1308-1485 for only 99p on Amazon UK and 99c on Amazon.com. It's a great deal and well worth taking advantage of.

If you don't own a Kindle, rest assured: you can still buy the book in paperback, but please note that the Amazon countdown deal doesn't apply to paperbacks, only to Kindle. I hope you think this a worthwhile deal - if you're looking for something to read, I'd love you to read (and review) the book!
Posted by Conor at 06:47 No comments: