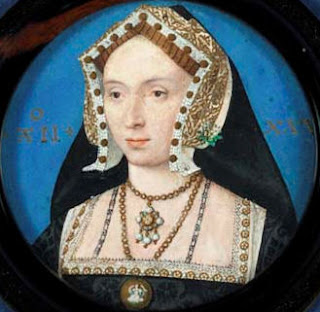 I was drawn to writing this blog post after reading a fascinating article by Gareth Russell entitled 'Why do we care about Mary Boleyn?' It would be fair to say that since the publication of Philippa Gregory's highly successful, if scandalously inaccurate, novel The Other Boleyn Girl in 2001, Mary has evolved into something of a historical celebrity. She represents feminism, love and bravery to many women who enjoy this period, although others continue to view her dubiously as someone who was, essentially, highly ordinary, and has only become known due to this successful book. Only a handful of her letters survive, we don't know what she looked like, when she was born, her relationships with her siblings or the nature of her childhood experiences. Rumours circulated that she was a 'great and infamous whore', but modern historians, such as Alison Weir, have questioned whether Mary was really the sexually-charged prostitute she is so often depicted as being.

Mary was probably the eldest child born to Sir Thomas Boleyn, a highly successful diplomat at Henry VIII's court, and his highborn wife Lady Elizabeth Howard. When they married is unknown, but it was before 1501 since Elizabeth's jointure was settled on her in November of that year. It is likely that Mary was born around 1500. She had a younger brother, George (born around 1504), and her infamous younger sister Anne, born either in 1501 or in 1507. Mary's appearance is unknown; she is often portrayed as being blonde, pale-skinned, blue-eyed and provocatively sexual. Rumours that she was more beautiful than Anne should be looked at sceptically, but if she attracted two kings Mary must have possessed some charm and physical attractions. Probably born at Blickling Hall, Norfolk, Mary was afforded the splendid opportunity of becoming maid of honour to Mary Tudor, queen of France, in 1514, when she was aged around fourteen. Apparently at the French court, she attracted a reputation of wantonness; some historians suggest that King Francis referred to her as 'the great prostitute' or a 'whore' who he boasted of riding. Leading many to conclude that Mary was at one point the French King's mistress, Weir has questioned whether Mary was really flighty, sceptically looking at these sources and suggesting they were written by those hostile to the Boleyns. Since Francis was a notorious womaniser, he may have been merely representing the prevailing gender beliefs of his time, in an age which identified women as sexually licentious and prone to seducing men when given the chance.

What happened to Mary next is something of a mystery, with some speculating that she returned to England. Her family afforded her a successful marriage to Sir William Carey, a courtier who served Henry VIII, in February 1520. Portrayed in The Other Boleyn Girl as colourless, dull and manipulated by her family, Mary's marriage to William may not have been a love marriage, but it is likely that she had  two children with him, Katherine (b. 1524) and Henry (b. 1526), both of whom later became favourites of their cousin, Elizabeth I. However, some historians - and Gregory portrays it in her novel - suggest that one, or both, children were fathered by Henry VIII, since it is likely that Mary became his mistress somewhere around 1522. The relationship was almost certainly not the great romance it is so often portrayed as being. Weir contends that Mary was manipulated by both her family and the king, while those who served the Pope later suggested that she had been violated, or raped, by  the King. Her husband achieved excellent rewards, probably due to his own capabilities, but his wife's pleasing nature may also have helped. How Mary we felt about this - we don't know. Her thoughts, feelings and beliefs are shrouded in mystery.

In 1526, Mary was, famously, replaced by her charismatic younger sister Anne, who attracted the king. However, unlike Mary, Anne famously refused to become his mistress; whether she actively tempted the king into annulling his marriage to Queen Katherine of Aragon or whether it was based more on his intense desire for a male heir is a matter of notorious dispute between historians. The Boleyn family gradually enjoyed greater and greater success in the late 1520s, with Anne's father becoming an earl and her brother, George, being made a viscount. Mary, however, enjoyed no such rewards. One historian speculates that she became a 'pariah', or embarrassment, to the Boleyn family. She certainly experienced some tragedy in 1528, when her husband William died from the sweating sickness. The 2008 film, with Scarlett Johansson, does not depict this. However, the novel suggests that the two may have enjoyed greater affection and intimacy after Mary was discarded by the king.

After that, not much more is known of Mary. She accompanied Anne to France in 1532, when she entertained the French king - the one who may have boasted of Mary's sexual nature. However, a shocking event occurred in 1534, when Mary, perhaps revealing her determined personality, finally took matters into her own hands. Aged around thirty-four, she married William Stafford, a man of little wealth or lineage, and became pregnant by him immediately. Unfortunately, Mary was forced to reveal this scandalous secret to her sister, who was by now Queen, and Anne understandably reacted with fury and outrage. Not only had Mary married a mere commoner, a highly unsuitable match for a woman who was not only a relative of the powerful Howard family but sister to the Queen herself, but she had not asked royal permission to marry which, as a member of the royal family, she needed to have. Anne banished Mary from court straightaway. This is where The Other Boleyn Girl really frustrates me. Anne, probably, never saw Mary again. So realistically, the book should end there. But no, it portrays Mary as running back to court to serve Anne when Anne begins to suffer mental breakdown after mental breakdown. Readers should note that this never happened. Anne was so shocked at her sister's behaviour that she never saw her again.

Mary's new marriage appears to have been affectionate. However, any children she had by Stafford seem to have died young. They probably retired to the country, although Weir suggests that they actually moved to Calais and resided there until some years later, which I find difficult to believe. Tragically, Mary's siblings, George and Anne, were both executed on trumped-up charges of treason, adultery and incest in May 1536. How Mary reacted to this is impossible to say, but she was probably shocked at the very least, although there is NO evidence - contrary to the book - that she was ever particularly close to her siblings. Her daughter, Katherine, went on to serve Henry's fourth queen Anne of Cleves in 1540, and then her cousin Katherine Howard, before Katherine Howard was executed on similar charges to Anne Boleyn in 1542. Mary died in July 1543, aged around forty-three. What she died of we don't know. Her burial place, similarly, remains a mystery.

It can therefore be concluded that Mary's life is a mystery. We know almost nothing of her, save that she was the sister of a Queen, the wife of a successful courtier, and the aunt of Elizabeth I. The Other Boleyn Girl needs to be recognised for what it is - highly mythologised, romanticised fiction. Philippa Gregory has declared Mary to be her hero, but as Russell bluntly and scathingly points out:

"Why on earth should Mary Boleyn qualify as anyone's historical heroine, out of all the hundreds of magnificent women who have peopled the pages of history? One need not look too far in Mary Boleyn's own gene pool to find women who actually did something with their lives. In contrast, the historical Mary Boleyn did absolutely nothing unremarkable, either by the standards of her own generation or ours".

I have to agree with Gareth Russell. If it wasn't for the widespread success of Philippa Gregory's novel, I doubt that anyone would even be vaguely aware of who Mary Boleyn was, let alone idolise and romanticise about her. The fact is, nothing can be known of her. She was almost certainly not as charming, intelligent, religious, influential, charismatic or mesmerising as her sister Anne. All that she is known for, sadly but truthfully, is for being a whore, the mistress of two kings.

Alison Weir has debated and challenged this view of Mary. Her counterarguments are largely successful - Mary probably wasn't the 'great whore' she is so saliciously depicted as being. But the problems are that in going against history and portraying Mary as a naive innocent, the tool of her family, Gregory dehumanises her sister Anne Boleyn, depicting her as a witch, murderess, adulteress, and poisoner. And this is supposedly from a feminist writer. Surely if she was a true feminist Gregory would applaud Anne for being a strong, ambitious woman who sought to make something of herself in a male-dominated world. But no, she doesn't, and as I wrote on my Amazon review, she betrays both Boleyn girls. I think both Anne and Mary would be shocked and offended at how they're portrayed in her novel.

The film, produced in 2008, is even worse. All of  the actors - none of whom are British, by the way - admitted to reading nothing but the novel as part of their research. Natalie Portman even admitted she didn't identify with Anne Boleyn at all. Contrast this with the incredible Natalie Dormer, who portrayed Anne in The Tudors (2007-10), who read book after book about Anne Boleyn, and even condemned the producers for the way they were presenting her in the series (!) because she was so determined not to betray her historical heroine. The Other Boleyn Girl smacks of laziness, contempt, and a desire to make Anne a scapegoat, and her sister a heroine. Those who know better will scorn the laughable attempts in this work to do so. The sad fact remains this - contrary to Gregory's attempts, Anne is the charismatic queen adored, even idolised, by many today and seen as a romantic victim, and not as the murdering whore portrayed in the novel, while her sister Mary, far from being a heroine for modern English women, is seen at best as colourless and unremarkable and at worst as a woman of very dubious sexual morals.
Posted by Conor at 14:44