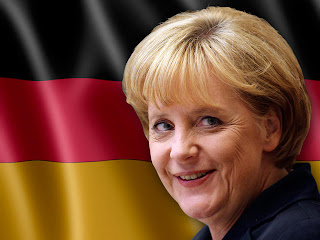 This weekend, I read a very interesting article, published in The Daily Mail, entitled: Kaiser Merkel, written by the eminent modern British historian Dominic Sandbrook. According to Sandbrook: 'many dismiss her as a mousy hausfrau. But, with ruthless cunning, Angela Merkel has made Germany master of Europe in a way Hitler and Kaiser Wilhelm only dreamt of. The implications are frightening...' Compelling stuff. But do Sandbrook's fascinating claims stand up to scrutiny? At a time when strong female leaders are currently in vogue - consider the recent onslaught of celebrations for the powerful Margaret Thatcher, who passed away on April 8 - this is a provocative article to write, and the issues it raises are certainly worth considering in detail.

Sandbrook begins by suggesting that, while Merkel may not look like a conqueror, due to her physical appearance and her small stature, he warns that it is dangerous not to take her completely seriously, which is something many leaders around the world, apparently, still do not do. Merkel has been at the pinnacle of power for eight years now - in 2005, she was elected Chancellor of Germany at the age of fifty-one, and has been the Leader of the Christian Democratic Union since 2000. It is intriguing to draw parallels between Merkel and her, sort of, contemporary Margaret Thatcher, who Merkel recently lauded as 'an extraordinary leader' who helped end the Cold War and 'set an example' for women in high office - probably most notably, herself. Indeed, it seems that Thatcher's infamous sobriquet, the Iron Lady, could powerfully be applied to Germany's Chancellor today.

Like Thatcher, Merkel has a background in chemistry. She was born in Hamburg in 1954, the daughter of a Protestant theologian, while her mother was once a member of the Social Democratic Party of Germany. As a pupil, Merkel was a member of the Socialist-led youth movement Free German Youth, before being educated at the University of Leipzig. She later worked and studied at the Central Institute for Physical Chemistry, before being awarded a doctorate and working as a researcher. Merkel is therefore formidably intelligent, with a strong academic background. In 1989, she got involved in the growing democracy movement following the controversial fall of the Berlin Wall, joining the new party Democratic Awakening.

Merkel's policies are interesting to follow. Her foreign policy in the years immediately after her election in 2005 saw her intent to strengthen transatlantic economic relations, signing at the White House in April 2007 the agreement for the Transatlantic Economic Council. Spiegel, a German publication, wrote that relations between Merkel and President Obama were strong. Merkel has also played a strong part in deciding to participate in the liquidity crisis, where the German government helped assist the mortgage company Hypo Real Estate following major falls in worldwide stock markets in September 2008; German banks were to contribute 30 billion euros. There has also, since 2006, been a strategic Indo-German partnership, focusing future co-operation on the realms of technology, science, energy and defence. Intergovernmental consultations took place in New Delhi between the two countries in 2011. In 2009, Merkel was awarded the Jawaharlal Nehru Award for International Understanding by the Indian government.

According to Sandbrook, a professor at the University of Munich, Ulrich Beck, has suggested that Merkel is no less than 'the uncrowned Queen of Europe'; a Kaiser, in fact, of the entire continent. Sandbrook notes that in countries like Greece and Cyprus, where the economic recession has been utterly abysmal and has, to an extent, ruined these countries, Merkel has become a public hate figure, with protesters drawing parallels between her rule and that of the war criminals of the Third Reich. Sandbrook also writes of how popular Merkel is in Germany, because 'the key to Mrs Merkel's appeal is her sheer dullness. Since no German can forget the dangers of extreme political idealism, many are drawn to the apparent banality of this quiet woman'. How true this is, of course, is debatable, since her popularity levels plummeted a few years ago and one could argue that it is her policies, rather than her personality, which has drawn substantial support from the German population.

It is compelling, as Sandbrook notes, that Germany is the biggest economy in Europe and the fourth biggest in the world; while it is the world's second largest exporter. Thus his claim that 'Germany stands relatively unscarred from the great financial crisis' makes perfect sense. Yet Professor Beck, and many others, darkly suggest that Merkel's power has been used for bad purposes, rather than for good, somewhat surprising coming from a German intellectual; surely the sort of man, according to Sandbrook's claim, who would respect her after the decades of turmoil Germany has experienced. Beck's claim arises due to the handling of the euro crisis, which has fundamentally damaged the economies of Greece, Ireland, Spain and Portugal - perhaps irretrievably - which has caused devastating unemployment; particularly for those aged 18-25 who are unlikely to ever get a job. Beck writes scathingly: 'entire regions have been plunged into social decline and countless people have been deprived of their livelihoods, their dignity, their future - and not least, their faith in Europe'. Europe is undeniably experiencing devastating political and economic turmoil, and it's not surprising that pessimists predict a continental war is on the horizons.

Beck believes that Merkel has seized control of this situation in order to restructure Europe and strengthen Germany's power. Protesters in Madrid have attacked her, accusing Germany of desiring to control Europe once more through imperialist-like policies, but ironically countries like Spain are forced to comply with Germany due to the dire state of their economies. Sandbrook concludes, perhaps a little sinisterly: 'In much of Europe, she inspires more fear than any other leader for decades'. Drawing links between her policies and those of Hitler are quite disturbing, particularly due to the darkness of the Nazi past still pervading German society. But Sandbrook notes how popular Merkel is in Germany, largely due to the success of these policies and how they have strengthened Germany's position as an economic superpower. But, he writes, 'Mrs Merkel's project carries the seeds of a terrible danger... the 'demons' of nationalism and war are stirring in Europe'. This makes for frightening reading.

Merkel's policies have been undoubtedly successful, and Sandbrook's essay makes for compelling reading. It is, however, sinister to read that some are predicting that war could well take place, partly caused by the impact of Merkel's decisions in other countries. Last week saw the funeral of the 'Iron Lady' Margaret Thatcher, yet it seems undeniable that it is the German Chancellor, Angela Merkel, who is the 'Iron Lady' of the twenty-first century.