The Execution of That Young Girl Katherine and That Bawd, Jane Rochford 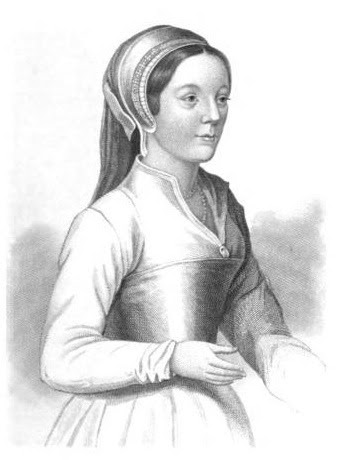 On this day, 13 February 1542, eighteen-year old Katherine Howard, fifth queen consort of Henry VIII of England, was beheaded privately on Tower Green for sexual crimes committed against her husband. Following her brutal end, her Lady of  the Bedchamber and relative Lady Jane Rochford was also executed.
Katherine, of course, was the second of Henry's queens to be beheaded, but she has not received the same compassion and pity which her more celebrated cousin, Anne Boleyn, has inspired. Often looked upon with scorn and contempt as being a scheming and spiteful whore, the true reality to the king's teenage queen is rather different.

Readers will know that I am currently researching and writing a biography of Katherine, largely because I think existing historiography on her is highly flawed, providing us with a totally false image of not only this young woman but her family, the Tudor court, her husband the king, and social and cultural beliefs in Tudor England. In 2012, I wrote an essay offering my version of why Queen Katherine fell so tragically from power in 1541, rejecting the popular belief that her sexual affairs, both before and after her marriage, were discovered by reformers who loathed the Catholic Howard family and eagerly informed the King, led by that fervent Protestant the Archbishop of Canterbury himself. There is very little evidence to support this interpretation, and my thesis is rather different concerning young Katherine's downfall in November 1541, eventually leading to her execution just 3 months later and leading to the deaths of 3 other people.

That essay led to me being invited to St Hugh's College, Oxford (I had submitted the essay for the 2012 Julia Wood Prize), as one of  the top ten applicants, something I was very honoured to participate in. Since then, I have actually modified my theories surrounding Katherine's downfall, and the reality is, I think, more disturbing. Scholars have largely neglected to realise how fundamental fertility politics were at Henry VIII's court. Bearing in mind, in its own way, fertility had destroyed the King's previous marriages - Katherine of Aragon and Anne Boleyn both rejected for failing to bear sons, Jane Seymour in the process of giving birth to one, and Anne of Cleves scandalously accused of rendering her husband impotent - it seems compelling that the fifth marriage also collapsed because of fertility issues. Rejecting the notion that Katherine, as an oversexed and lusty adolescent took multiple lovers behind her husband's back, I believe that not only did she never have sex with Thomas Culpeper, but these meetings were sinisterly interpreted by the Council as evidence of the Queen's desperate attempts to conceive a child due to Henry's impotence. That the King was impotent, I think, is obvious. It was an issue in both his marriages to Anne Boleyn and Anne of Cleves. Katherine Howard, in effect, was a scapegoat for her husband's impotence. Believing that she was trying to conceive a son since her husband could never provide her with one, this young woman was brutally destroyed, along with Jane Rochford, who was believed to be assisting her, and Francis Dereham, a manipulative individual who I believe was sexually violent towards Katherine, and Thomas Culpeper, an ambitious courtier who probably manipulated Katherine into granting him favours.

The year 1541 abounds with evidence of the royal couple's fertility problems. I won't go into it in detail here, for it will be explored fully in my biography, to be published this summer. However, what is clear is that in November 1541, days after being celebrated as the king's most loved queen in churches across England, Queen Katherine was confined to her chambers and forbidden to see her husband. Her shock, fear and confusion must have been evident. She was ruthlessly interrogated several times, but consistently maintained that she had never taken lovers behind the king's back and swore that Dereham had raped her. Most historians dispute both of these confessions, but I believe them to be true. In December, both Dereham and Culpeper were executed for treason, but Culpeper insisted that he had never slept with Katherine, which she insisted too. During this time, both the Queen and Lady Rochford were imprisoned, before being taken to the Tower of London.

Despite her repeated avowals of innocence, Katherine was condemned to die as a traitor, and Jane Lady Rochford was also condemned for misprision of treason. Jane's reputation has been abominable; with historians often arguing that it was she who brought forward charges of incest against her husband and Anne Boleyn, who were brother and sister. Whether this is true or not is unclear. Nonetheless, Jane seems to have had a full mental breakdown in the Tower, and the King passed a law allowing him to execute mad people, surely conveying his desire to be revenged upon this gentlewoman. Katherine, too, collapsed with shock and horror at what had befallen her. She was described often by several reporters as being in a highly weak state physically, and it was later suggested that she had to be physically helped up the scaffold.

On 13 February, the queen and her female attendant emerged from the Tower, proceeding on the short walk to Tower Green for their ultimate punishment. Katherine's execution has often been shrouded in a fair degree of mystery. The Spanish ambassador claimed that the night before her beheading she requested the block, in order to practice laying her head on it before the actual execution. In popular culture, she is often depicted as terrified with fright, as anyone who was seen Henry VIII (2003), with its harrowing depiction of Katherine's execution, will know. (Emily Blunt, playing the young queen, is shown screaming and crying with fear, protesting "I don't want to die!") In The Tudors, Tamzin Merchant presents Katherine as wetting herself on the scaffold with fear.

The reality is that Katherine was much braver, although the French ambassador reported that she was so weak that she could barely stand or speak. That she was in a state of shock seems clear. Her uncle had previously stated that she was tormenting herself with fear, as the Archbishop of Canterbury had also implied when he had interrogated her 3 months earlier. An eyewitness to the execution, a London merchant called Otwell Johnson, gave a very different account of Katherine and Jane's last moments. He stated that:

thay made the moost godly and christyan's end, that ever was hard tell of... uttering thayer faeth in the blode of Christe onely, and with goodly words and stedfast countenaces thay desyred all christen people to take regard unto thayer worthy and just punnishment with death for thayer offences, and agenst God hainously from thayer youth upward, in breaking all his commandements...

A notorious Catholic source, entitled The Chronicle of Henry VIII and written by an anonymous Spaniard living in London in the 1550s, gave a differing portrayal of Katherine's execution. Readers have to bear in mind that many of his reports are highly inaccurate. For instance, the king's marriages to Anne of Cleves and Katherine Howard are reversed, Cromwell interrogates Katherine (fact, he had died almost 2 years previously) and no mention is made of the executions of Dereham and Jane Rochford. He reported that the Queen apparently stated:

long before the King took me I loved Culpepper, and I wish to God I had done as he wished me, for at the time the King wanted to take me he urged me to say that I was pledged to him... I would rather have him for a husband than be mistress of the world... I die a Queen, but I would rather die the wife of Culpepper.

This famous detail, that Katherine apparently wished to die the wife of Culpepper, is entirely fictional. In the Spanish chronicler's account, the Queen embarks on a passionate love affair with this courtier, and the King is depicted as a cruel tyrant who breaks apart the couple's tender love by choosing Katherine for his wife. This, of course, is almost certainly untrue. The true reality of their relationship is complicated. I agree with David Starkey and Retha Warnicke that they never had sex, and I believe Warnicke is right when she claims that Culpeper manipulated the young and naive Queen, but I do believe Katherine had tender feelings for him. Nonetheless, my theory is that she only turned to Culpeper initially because of her mounting concerns about her husband's fertility problems, and sought out Culpeper because he was the King's closest attendant and thus fully aware about his sexual problems, and so could have enlightened her.

The Spanish chronicler described Katherine as only fifteen when she met the King, and depicted her as being very beautiful, remarking that she was the loveliest lady in the kingdom. Following Katherine's death, Jane Rochford was immediately executed. Apparently insane - as described controversially in Philippa Gregory's The Boleyn Inheritance - she made a long and rambling speech which irritated contemporaries. Fully double the Queen's age - she was born c. 1505 and so was aged around 37 - she was almost certainly not the pathological monster she has so often been depicted as. The legend that Jane admitted that she had provided evidence against Queen Anne and George Boleyn, and regretted it emotionally, is untrue. Whether it was she or Katherine who initiated the meetings with Culpeper is almost impossible to say.

I have covered the deaths of 3 Tudor Queens this month, 2 of whom were teenagers (Katherine not yet 19, Jane Grey 17). But Katherine Howard, out of all the Tudor women beheaded, is almost certainly the most misunderstood out of all of them, and yet I believe that in many respects she was the ultimate victim. A naive, kind-hearted girl who was manipulated by experienced and aggressive older men, she tried to do her best as Queen, showing genuine kindness towards several personages, and advanced her family in order to benefit them. It was not her adultery, her foolishness, her lustiness which eventually killed her. It was fertility politics, ultimately making her a scapegoat for her husband's inability to impregnate her. Increasingly suspicious and distrustful of his young queen, when evidence emerged that Katherine had employed her former lover (probably to appease him) and had had nighttime meetings with Thomas Culpeper, the King believed that she had betrayed him, hoping to fall pregnant by either, or both, these men and pass off their bastard as the King's son. Agnes Strickland described Katherine as being led like a sheep to the slaughter without having the opportunity to say a word in her own defence. Her innocence and naivety was rare in the Tudor court.
Posted by Conor at 12:32