The End of Joan of Arc

On 30 May 1431, a young woman of nineteen years was burned to death in Rouen, Normandy. A year previously, Joan of Arc (known to the French as La Pucelle d'Orleans, the maid of Orleans) had been captured by the Burgundians, who handed her over to the English. She had almost single-handedly revived French fortunes during the Lancastrian phase of the Hundred Years' War between the traditional enemies England and France. Now, she was to die a shameful death, associated with witchcraft and heresy, a perversion of the natural order of things.

Joan had been born in northeastern France in around 1412, in an area that remained loyal to the French crown despite being close in proximity to Burgundian lands. At the age of thirteen, Joan reportedly experienced visions while in her father's garden. She saw the figures Saint Michael, Saint Catherine and Saint Margaret, who instructed her to bring about the expulsion of the English from France, and to bring the Dauphin to Reims for his coronation. Thus began Joan of Arc's mission, as she perceived it. Her experience thus far could be viewed as a sign of God's favour, uniquely bestowed upon her, but to others it betokened witchcraft.

Joan later visited the court of Charles VII, and she was financed with an army by the king's mother-in-law Yolande of Aragon. Joan requested to be equipped for war and to be placed at the head of the king's army; her requests were duly granted. Stephen W. Richey notes: 'Only a regime in the final straits of desperation would pay any heed to an illiterate farm girl who claimed that the voice of God was instructing her to take charge of her country's army and lead it to victory'. The king perhaps viewed Joan as sent from God, the means by which France could be delivered from subjection to England. Her presence offered the promise of French independence and French victory. Others, however, were concerned; they wondered whether Joan was a heretic or a sorceress, while her decision to wear the clothing of a soldier would later be brought against her. In response to initial concerns about Joan, a commission of inquiry at Poitiers concluded that Joan was 'a good Christian' and 'of irreproachable life'. Shortly afterwards, Joan visited the besieged city of Orleans in April 1429, and was present at the councils and battles thereafter.

Above: Charles VII of France.

Joan believed that she had been instructed by God to drive the English from France and ensure that the dauphin was crowned; as she saw it, her mission was a holy one. The lifting of the siege at Orleans was perceived by contemporaries as evidence that Joan truly was God's messenger, and she gained the support of the archbishop of Embrun and the theologian Jean Gerson as a result. Joan later provided the Duke of Alencon with advice about strategy. After the lifting of the siege and the battle of Patay, which was a decisive victory for the French, Joan accompanied the victors on the march to Reims. 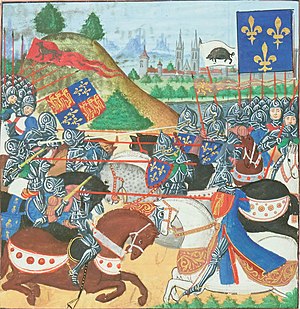 Reims opened its gates on 16 July 1429, and the coronation took place the following morning. The French army accepted peaceful surrenders from towns near the capital. In December that year, Joan and her family were ennobled by a grateful Charles VII as a reward for her actions. Six months later, she was present at the siege of Compiegne, the scene of her final military action. Joan was ambushed and captured; later, she was imprisoned by the Burgundians at Beaurevoir Castle. She made several escape attempts, including jumping from a window 70 feet high, but miraculously survived, which was for her supporters another sign of her divine favour. Later, Joan was moved to Rouen.

Above: Joan of Arc's entry into Reims in 1429; painting by Jan Matejko.

In early 1431, Joan's trial began. It was a contentious affair and several of the clergy had to be threatened with their lives to participate in it. These threats and the domination of the trial by a secular government actually violated the rules of the Church. Usually, a heresy trial should be conducted without secular interference. Ecclesiastical law was further violated by the refusal to allow Joan a legal adviser. Joan was charged with heresy and cross-dressing, a heinous offence in fifteenth-century eyes since it violated the natural order. Joan explained that she had chosen to wear male attire to protect herself from molestation; others testified that her dress had been taken by the guards and she had nothing else to wear. On 30 May, her execution took place. Burning at the stake was the customary method of execution for those found guilty of heresy. A crucifix was held before her by two of the clergy as she was tied to the stake. Her remains were cast into the Seine river. Some, at least, believed that a saint had been burned.

Two decades after her death, in 1452, a retrial was ordered, authorised by Pope Callixtus III at the request of Inquisitor-General Jean Brehal and Joan's mother, Isabelle. A formal appeal followed three years later, and in the summer of 1456, the court declared that Joan was innocent. She was canonised by Pope Benedict XV on 16 May 1920.

In a short but extraordinary life, Joan of Arc was perceived in the contradictory guises of woman, warrior, saviour, heretic, witch, and saint. Following her death, she became something of a legendary figure and has inspired many by her bravery and willingness to die for her faith. She was certain that she had been chosen by God to ensure France's total victory over the English; it was the driving force in her life. Since her death, Joan has inspired artistic and cultural depictions for six centuries. Ultimately, although she did not live to see it, France's victory in the Hundred Years' War lent credence to the legitimacy of Joan's mission, signifying that she had indeed been favoured by God. Her retrial served to vindicate Joan, and in death she has been granted the admiration and awe that was largely denied to her in life.
Posted by Conor at 01:17