Five years ago, I published a blog post about the date of birth of Katherine Howard, fifth wife of Henry VIII. In the course of researching and writing about her life, I became increasingly aware of the influence that misconceptions about her continued to play in historical writing. Two years after that blog post, my full-length study of Katherine's life was published. In that book, I argued that Katherine was almost certainly the second daughter of Edmund and Jocasta Howard: her older sister Margaret was born by 1518, and her younger sister Mary was probably born by 1525. We know for a fact that all three girls, and their three surviving brothers Henry, Charles and George, were born by 1527, according to Edmund Howard's own correspondence.

Since that book was published, I have continued to research and reflect on Katherine's probable date of birth. Undoubtedly, when she was born is highly important, for it influences our interpretation of her adolescent relationships in the household of her step-grandmother, the dowager duchess of Norfolk. It also influences how we perceive her relationship with Henry VIII, whom she married in 1540. It is worth thinking about Henry's own marital and sexual preferences, a much-debated issue that perhaps, strangely, neglects the issue of age.

Henry VIII was not yet eighteen when he married Katherine of Aragon, who was twenty-three, in 1509. Sixteenth-century women could legally marry at twelve years old, but it was rare for them to marry at so young an age. Women from the lower classes married, on average, at twenty-five or twenty-six, and even among the nobility, women tended to marry at about twenty, or in their late teens. Anne Boleyn's mother, for example, was probably married by the age of nineteen or twenty, and Jane Parker, wife of George Boleyn, was about nineteen at her marriage. During his marriage to Katherine of Aragon, Henry was involved in liaisons with Bessie Blount (who was born by 1500, if not before, and was therefore nineteen when she gave birth to the king's son in 1519) and Mary Boleyn, who had probably been born by 1501 and was therefore in her early twenties.

In 1527, Henry fell passionately in love with Anne Boleyn, younger sister of a previous mistress. Anne was probably six years younger than most historians assume. In 1527, she was probably twenty years of age. A variety of palace officials, servants and the likes of Cardinal Reginald Pole all characterised her as young. Gareth Russell has also pointed out that not once, during the six arduous and time-consuming years in which Henry fought to secure from the Pope an annulment of his first marriage, was Anne's age queried as a barrier to marriage. Undoubtedly, had she been as old as thirty or thirty-one during Henry's courtship, questions would have been raised as to whether she was a suitable partner for childbearing.

When Anne married the king in late 1532, she was probably twenty-five, and according to an attendant of her stepdaughter Mary, the disgraced queen was not yet twenty-nine when she was executed in May 1536. Her successor Jane Seymour was, according to the Imperial ambassador Eustace Chapuys, a little over twenty-five when she became Henry VIII's bride in 1536, suggesting that she was about twenty-six or twenty-seven. At her funeral the following year, there was a female mourner for every year of Jane's life: twenty-nine in all. Probably, according to the contemporary tradition of marking one's age, this referred to Jane dying in the twenty-ninth year of her life, rather than having died at the age of twenty-nine: therefore suggesting that she was born in about 1509.

In 1540, Henry married Anne of Cleves, a twenty-four year old German noblewoman. It was rumoured before his marriage to Anne that Henry had been romantically interested in Anne Basset, a former maiden of Jane Seymour. Mistress Basset was born in 1521 and so would have been sixteen or so when the king's eye fell on her, however briefly. Before the negotiations to marry Anne of Cleves, Henry had expressed an interest in marrying the seventeen-year-old Christina of Milan.

Plainly, Henry's preference was for women in their late teens or early twenties. Bessie Blount and Mary Boleyn, his two most well-known mistresses, were in their late teens, Mary perhaps her early twenties. Katherine of Aragon and Anne of Cleves were both in their early twenties, while Henry first became interested in Anne Boleyn when she was about twenty, although she was in her mid-twenties when they married. Jane Seymour, on the other hand, was probably twenty-seven. The glaring exception to this rule was Katherine Parr, who was thirty-one when she married Henry VIII in 1543, but she had already been married twice previously and there does not appear to have been any expectation on the king's behalf that she would provide him with children, unlike all of his previous marriages. It was highly unusual for a noblewoman to remain unwed by her late twenties or early thirties. Indeed, so anomalous was the as-yet unwed Jane Seymour's position in early 1536 that the Imperial ambassador openly questioned both her virginity and her morals. Jane, at twenty-seven, was still unmarried. 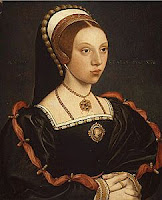 When Katherine Howard caught the king's eye in late 1539 or early 1540, contemporary observers not only praised her attractiveness, but they also commented on her youth. According to Richard Hilles, she was a 'young girl', while the French ambassador referred to her as a 'young lady'. The anonymous author of The Chronicle of Henry VIII expressly stated that she was about fifteen when Henry fell in love with her, and also referred to her as a 'mere child'. George Cavendish, in his verses about Katherine's life, mentioned youth ten times. Plainly, the implication was that Katherine's youth and beauty were noticeable.

In the late twentieth-century, modern historians assumed that Katherine was born in 1520-1 because of a portrait housed in the Toledo Museum of Art, with versions also at the National Portrait Gallery and Hever Castle. The well-dressed sitter is, according to an inscription in the painting, in her twenty-first year. Quite why this portrait was identified as a portrait of Katherine remains unclear. The notion that it is an image of the hapless queen has been comprehensively debunked. Recently, it has been suggested that the sitter may plausibly be identified as any one of Frances Brandon, Eleanor Brandon, Margaret Douglas or Elizabeth Cromwell.

By contrast, a portrait housed at the Metropolitan Museum of Art in New York depicts a magnificently dressed young woman aged in her seventeenth year, according to the inscription, and it has been dated to c.1540-1545. A number of historians, including myself, Gareth Russell and Susan James, have suggested that Katherine may well be the sitter in the painting. Although the identification is speculative, if it is true then it would suggest that she was born in 1523 or 1524, assuming that the painting was painted in 1540-1. This identification, however, remains tentative.

When she was appointed a maid of honour to Anne of Cleves in late 1539, Katherine joined her cousin Katherine Carey and Mary Norris, who were born in 1524 and 1526, respectively. Undoubtedly, had she been born as early as 1520, Katherine's family would have attempted to arrange for her to serve Anne Boleyn or Jane Seymour in the years 1533-7. There is no evidence that they did so. It is probably significant that she only began receiving music lessons from Henry Manox and Master Barnes in 1536, when she was likely in her early teens.

However, the French ambassador commented that Katherine had been intimately involved with Francis Dereham from her thirteenth to her eighteenth year, thus suggesting a five year relationship. Modern historians have usually taken this comment as evidence that she was born in 1520-1, for the relationship probably ended in early 1539. I am persuaded by Retha Warnicke's argument, however, that the ambassador was probably unaware of Katherine's earlier liaison with Manox, which took place in 1536-7. In the wake of Katherine's downfall, it became apparent that she had appointed Dereham to her service and, it was rumoured, had met with him in a return to their previous relationship. If Katherine was about thirteen in 1536, then she might have been eighteen in 1541 when she confirmed Dereham's appointment to her household, therefore explaining the ambassador's reference to the ages of thirteen and eighteen.

The contradictory comments of the French ambassador and the unknown author of The Chronicle of Henry VIII clearly indicate that there was a degree of confusion about Katherine's exact age; possibly neither man knew for certain when she was born. However, Cavendish's ten references to her youth in his verses is probably significant, as are the other reported remarks about her young age when she became queen. That she was not born earlier than 1523 is a reasonable assumption in view of the ages of her fellow maids of honour, the date at which she began receiving music lessons (probably in readiness for her anticipated appointment to the queen's household) and the evidence of her grandparents' wills. In 1524, her grandfather John Legh's will did not refer to Katherine or her younger sister, but her grandmother Isabel's will, which was written three years later, referred to all three Howard girls. Whether this is evidence that Katherine and Mary were born between 1524 and 1527, however, is unclear, but at the very least it seems to suggest that they were either not yet born or were very young when their grandfather's will was penned.

The traditional argument that Katherine was born as early as 1520-1 has been proven to be shaky and based on a dubious portrait identification. Most modern historians now believe that the portrait is not of the queen, but probably depicts one of the king's nieces or Elizabeth Cromwell, younger sister of Jane Seymour. It is probably significant that the three most recent biographers of Katherine - myself, Josephine Wilkinson and Gareth Russell - all advocate a later birth date. Wilkinson agrees with Joanna Denny that Katherine was born in 1525, probably the latest possible date for her birth. Russell suggests 1522 or 1523. The evidence available, in my opinion, seems to suggest a birth date of 1523. Sixteenth-century children were occasionally named for the saint on whose feast day they were born; St. Katherine's Day is 25 November. Whether this suggests that Katherine Howard was born in November 1523 is impossible to say, but the considerable evidence available to historians probably indicates without a doubt that she was born no earlier than 1523 and no later than 1525. This would mean that she was about seventeen when she married Henry VIII and had probably not yet attained the age of nineteen when she was executed in early 1542.
Posted by Conor at 14:04