Tess of the d'Urbervilles & the Fallen Woman in Victorian England 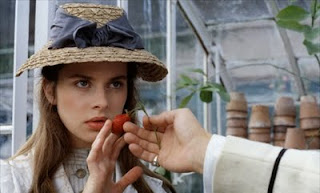 Above: Nastassja Kinski as Tess.
The Outcast, Richard Redgrave (1851).

The Victorian era (1837-1901) famously espoused oppressive, even stifling, moral values concerning domesticity, sexuality, and femininity. Building on ancient and medieval ideals of sinfulness and the seductiveness of Eve, women were expected to be chaste, virginal, silent and fair - as Coventry Patmore immortalised in his 1854 poem, they should be an 'angel in the house'. Those who rejected these values were viewed as a threat to respectable society and became known as 'fallen women'. They became outcast, shunned, because they were viewed as tainted and spoiled. Richard Redgrave's famous painting, The Outcast, illuminatingly explores these issues. The painting illustrates a father casting out his daughter from the family home because she has allowed herself to be seduced and has borne an illegitimate infant which she holds in her arms. Other family members weep, plead with the father, and beat the walls with frustration. We cannot tell if they are sympathetic towards the outcast woman, or whether they feel shame and dishonour. This painting serves as a warning to other young women of the dangers of male seduction.

Victorian authors explored the theme of the fallen woman in their novels. It is worth considering, therefore, whether or not they perceived the fallen woman to be a threat to society, by virtue of her corrupted social position, or whether they discerned her to be a greater threat to ideals of femininity and respectability. Perhaps the two were intertwined and connected. These authors were usually sympathetic. Gabriel Rossetti, William Holman Hunt and Ford Madox Brown recognised the complex and powerful emotions which the fallen woman experienced by virtue of her fall from grace. These particular painters portrayed the fallen woman in a tragic light, with Rossetti presenting the fallen woman in his painting Found as a prostitute who is too ashamed to return to her former lover, who attempts to carry her off. Rossetti questions whether the fallen woman should so easily be condemned and judged when her situation was often a great deal more complicated and less clear-cut. Holman Hunt even more controversially presented the fallen woman in Awakening Conscience as a redeemer, a repentant sinner. Ford Madox Brown castigated men for their irresponsibility and warned them to aid their lovers when they fell from grace.

Authors were similarly quick to recognise the complexities of the situation. Perhaps most famously, Thomas Hardy centralised the theme of the fallen woman in his classic novel Tess of the d'Urbervilles, published in 1891. The novel's subtitle, A Pure Woman, infuriated and scandalised critics when the novel was first published, for they perceived the novel's heroine Tess to be anything but a pure woman. The novel's plot is well known. The daughter of an impoverished villager dwelling in rural Wessex during the nineteenth century, Tess Durbeyfield discovers, in a dramatic chain of events which will lead to her early death, that she may be descended from the ancient and renowned family of d'Urberville. Her family, determined to recover their fortunes, encourage her to approach her 'cousin' Alec d'Urberville who, they hope, will assist her in obtaining the family fortunes. However, the sly and menacing Alec proceeds to seduce the innocent Tess, culminating in the controversial but eerie scene of Chapter 11 which is renowned for its ambiguity - does Alec rape Tess, or does she willingly allow sexual intercourse with him? The narrator presents her in an innocent and victimised light through the use of colour imagery to emphasise her purity: 'the white muslin figure', 'this beautiful feminine tissue, sensitive as gossamer, and practically blank as snow yet, there should have been traced such a coarse pattern as it was doomed to receive...' We are left in doubt that Tess, an innocent and sexually inexperienced maiden, is relentlessly and unwillingly seduced by the amorous Alec. Tess later gives birth to an illegitimate son, who dies several weeks later. As a fallen woman, like so many other women of her time and class Tess is forced to seek employment outside her home, and journeys to Talbothays Dairy where she meets and falls in love with Angel Clare, an apprentice farmer.

When Angel asks Tess to marry him, this naturally puts her in a difficult position, for Angel is unaware that Tess is not a virgin and has borne an illegitimate child. Although he disavows religion and seems unconventional, Angel in fact adheres to contemporary gender and social prejudices pervading his era. Growing increasingly troubled and alarmed, Tess decides to inform Angel about her past, although her mother warns her not to. Believing that he will prove understanding and sympathetic, Tess is devastated to learn that Angel, like most Victorian men, views her as corrupted and tainted by virtue of her past: 'O Tess, forgiveness does not apply to the case! You were one person; now you are another', 'the woman I have been loving is not you... another woman in your shape'. Cruelly, he informs her that she is 'another' person. The couple later separate, and Angel journeys to Brazil to begin a new life. She is later reacquainted with Alec d'Urberville, who begs her not to tempt him again (adhering to contemporary values which blamed the woman for sexual transgressions) but then professes his desire to be with her. At this point, Angel begins to repent of his treatment of Tess. Eventually, the couple are reacquainted. When Angel begs her forgiveness, Tess admits that she has become Alec's mistress since she believed that Angel would never return to her. In a fit of anger and sorrow, Tess stabs Alec to death and runs away with Angel. They travel to Stonehenge, where Tess is discovered by the police and arrested. She is later executed, and Angel marries her sister.

The novel explores the unfairness of the sexual double standard pervading Victorian society. But does Hardy suggest that the fallen woman is perceived to be a greater threat to her society, or to ideals regarding the ideal woman? Of course, the two might not be completely independent from one another, but it seems likely that Tess is viewed by her male contemporaries as a greater threat to ideals of femininity. Angel admonishes her for appearing to be pure and chaste, when in fact she is not a virgin and has already borne an illegitimate child. Alec blames her for apparently seducing him, ignoring the fact that he probably raped her in the eerie setting of the Chase. On the other hand, Tess clearly fears that she will be viewed as threatening the values and ideals of the society in which she lives. She remains silent about her past life when she seeks new employment at the dairy, because of the fear that if found out she will be thrown out of respectable society, and her family warn her not to reveal her past to other individuals. Finally, the actual ending of the novel and Tess' eventual fate - execution in a Wessex prison - serves as a warning of how the fallen woman, by virtue of her actions, is believed to dangerously threaten respectable Victorian society, and is deserving of severe punishment for her actions. While Tess is executed as a murderess, this chain of events ultimately begins and ends with the belief that she is a fallen woman, seduced and corrupted at an early age, and outcast from her society.

The unfairness of the position of the fallen woman was recognised by other eminent Victorian authors. Charlotte Bronte's Jane Eyre evidences Jane's rebelliousness and fury with ideals concerning femininity and warning against the dangers of female sexuality and transgression, while rejecting the ideal of the 'angel in the house'. As Beth Kalikoff notes in her article The Falling Woman in Three Victorian Novels (1987), 'both popular fiction and nonfiction barely conceal a genuine dread of female sexual, social, and economic autonomy'.

The fallen woman was a pressing issue in Victorian society. Playing on contemporary ideals of femininity and sexuality derived from ancient understandings, the fallen woman was perceived as transgressive, corrupting, and irresponsible. She was shameful to her family, repulsive to her society, and threatening to other women. Victorian authors such as Hardy and Bronte portrayed the theme of the fallen woman in a positive light, but the ultimate fate of women such as Tess demonstrates the dangers in rejecting ideal female values and qualities. As Tess' case, albeit fictional, discerns, the harshest of punishments could be meted to fallen women. But the medium of literature and art allowed individuals to criticise and condemn the harshness and cruelty of punishing fallen women because of the devastating impact these actions had on their lives.
Posted by Conor at 04:34