The Battle of Bosworth 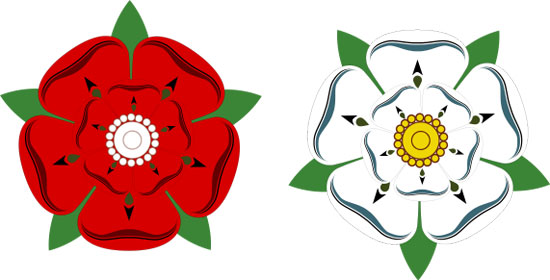 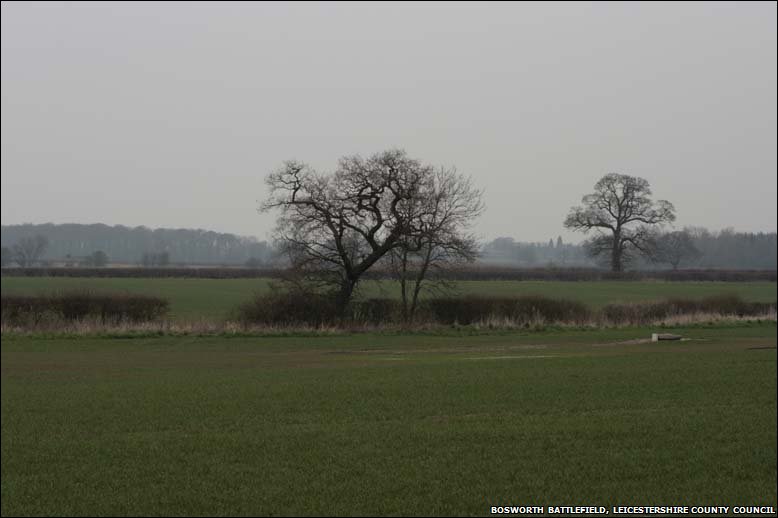 Although the Wars of the Roses - known in the fifteenth century as the Cousins' War - had been raging intermittently and violently for the last 30 years, encompassing horrific battles at Towton, Barnet and Tewkesbury and more minor skirmishes across the country, the Battle of Bosworth on this day in history, 22 August 1485, was unquestionably the most significant battle of the lot. The Wars had seen three usurpations (Edward IV usurping Henry VI; Henry usurping Edward; and Richard III usurping Edward V), and Bosworth threatened a fourth usurpation: that of the relatively unknown Henry Tudor, earl of Richmond, who prepared to face England's controversial king, Richard III.

For many years the exact location of the Battle was controversially debated and questioned by both archaeologists and historians. Danny Williams, in 1974, developing the research of eighteenth-century historians, theorised that Richard's army gathered on the western slopes of Ambion Hill and marshes on the southern slopes, while Henry Tudor's forces approached from Whitemoors. The Stanley forces arrived from Near Coton. Williams suggested that the forces clashed west of Ambion Hill, near Shenton, where the Yorkist king eventually died.

However, Peter Foss (1985) disagreed with Williams' conclusions and believed that the battle occurred on low lying ground, Redesmore, which was situated between Ambion, Dadlington, Stoke Golding, Upton and Shenton. Richard's army assembled on a ridge southwest of Ambion Hill while Henry's troops gathered on Fenn Lane; the Stanley forces, meanwhile, gathered at Stoke Golding and Dadlington. Foss placed the actual battle north of Stoke Golding, on Fenn Lane. Michael K Jones, writing in 2002, disagreed, placing Henry's camp at Merevale since the Crowland Chronicle reported that Henry Tudor had provided compensation to Mancetter, Witherley, Atterton and Fenny Drayton for damage caused to crops during the battle. He put Richard's army between Merevale and Ratcliffe Culey. Jones concluded that the actual battle occurred in the area south and east of Ratcliffe Culey.

These conclusions were undermined by the 2010 archaeological survey funded by the Heritage Lottery Fund, using metal detecting, in which Glenn Foard, a Battlefields Trust archaeologist, located evidence to provide the true location of the battle: "the site, never before suggested as the battlefield, straddles the Roman road known as the Fenn Lane, near Fenn lane farm. It is three kilometres south-west of Ambion Hill and a kilometre west of the site suggested by Peter Foss." A silver gilt-boar, Richard's badge, was discovered, probably worn by a knight in the king's retinue during the battle. Silver coins belonging to Charles of Burgundy and the largest collection of round shot found on a medieval battlefield were also discovered.

Richard III had endured a controversial and difficult reign since first usurping the throne 2 years previously, following the premature death of his elder brother Edward IV. Whether Richard was ultimately responsible or not for the deaths of his two nephews, the 'Princes in the Tower', his unlawful usurpation of the Crown had caused scandal and outrage in England. While Richard had been successful in restoring law and order, and enacted successful financial and legal reforms, he continued to face rebellion and threats during his brief reign. These were headed by Henry Tudor, the young earl of Richmond who had been groomed by his uncle Jasper Tudor, with the assistance of Henry's ambitious and notorious mother Margaret Beaufort, with the intention of, one day, making him King of England. In promising to marry Elizabeth of York, daughter of Edward IV, once he had become king of England, Henry was able to enjoy support from English Yorkists, many of whom were disaffected with Richard and desired his usurpation.

Henry had first attempted to invade England in 1483, during the Duke of Buckingham's rebellion against King Richard, but stormy weather frustrated his attempts. However, Henry refused to give up, and on 7 August 1485 successfully arrived on the south-west coast of Wales, determined to claim his crown. Henry gathered crucial support on his journey through the country, although the support and allegiance of his mother's husband, Thomas Stanley, and his family proved less certain, even during the battle itself. As Henry was to recognise, their support was essential to his cause.

Richard, however, refused to renounce his throne without a fight, and mustered his own troops, which vastly outnumbered those of the Tudor pretender. He intercepted Henry's army south of Market Bosworth in Leicestershire in late August. John Howard, duke of Norfolk, and Henry Percy, earl of Northumberland, were among several powerful nobles who supported Richard's cause and served in his army. By contrast, Henry was able to rely on the support of John de Vere, earl of Oxford. Wary of the Stanleys, Richard took Lord Strange, son of Thomas Stanley, as hostage for his father's support during the battle.

The Yorkist army, which probably numbered around 10,000, assembled on the battlefield, with Norfolk's group of spearmen assembled on the right flank, protecting the cannon and 1,200 archers. Richard's group, encompassing 3000 infantry, formed the centre. Northumberland's 4000 men, most of them mounted, guarded the left flank. In contrast, Henry probably had fewer than 1000 English men in his army; historian John Mackie suggested in 1983 that 1800 French mercenaries, led by Philibert de Chandee, formed the core of the Tudor army. John Mair, writing in c1520, argued that many of the force were Scottish. In total, Henry's army encompassed some 5000 men. The earl of Oxford commanded his army and retired to the rear with his bodyguards.

During the battle, Richard's army held sway for much of it, and a Yorkist victory appeared inevitable during the early stages. Henry's troops were harassed by Richard's cannon as they sought to manoeuvre around the marsh. Norfolk's men and contingents of Richard's group advanced, with arrows attacking both sides as they advanced. Norfolk's men fled the field as Oxford's men proved steadier in hand-to-hand combat. Crucially, Northumberland's men refused to assist Richard's forces when the King sought to engage their help, recognising his army's weaknesses. Why Northumberland refused to help has been debated by modern historians.

Richard himself decided to attack Henry's group after witnessing Henry's departure to the Stanleys. While Richard killed Henry's standard-bearer William Brandon, and managed to unhorse Edward IV's former standard-bearer John Cheyne, Richard was defeated by the crucial decision of Sir William Stanley, kin to Henry Tudor, to lead in his men to fight at Henry's side. The king's group was outnumbered and surrounded by enemies. Richard's banner man Sir Percival Thirwell lost both his legs but, admirably, managed to hold the Yorkist banner aloft until he was hacked to death. Richard's horse was mired in the soft ground, forcing him to fight on foot. While his followers offered him horses in order to escape, the king refused. Although, as contemporary chroniclers agree, Richard fought valiantly to the end, he was overwhelmed by the numbers of Welsh spearmen around him and was killed on the battlefield. Richard's forces disintegrated on news of his death - the duke of Norfolk was killed, while Northumberland and his men, who had refused to intercede on Richard's behalf, fled north.

Although there is no evidence to support the legend that Richard's crown was eventually found in a hawthorn bush, Richard's circlet itself was found and brought to Henry, who was crowned King on Crown Hill, near the village of Stoke Golding. The Yorkist king's corpse was stripped naked and strapped across a horse, before being brought to Leicester and openly exhibited in a church to prove his death. The corpse was eventually placed in an unmarked tomb in Greyfriars Church. Discovered in 2012, it is possible that Richard's body will be reinterred in York Minster. Since he was extremely popular in the North, where he exercised formidable power, enjoyed widespread loyalty and because his family were the Yorkists, this would be a fitting place for him to be buried.

Henry eventually married the nineteen-year old Elizabeth of York, ending the bloody feud between the Yorkists and Lancastrians and ushering in a new ruling house, the Tudors, who would rule England for 118 years, bringing in alternatively peace, prosperity, bloodshed, rebellion, and murder. Henry VII actively presented the Battle of Bosworth as a symbol for a new beginning for England, hiring chroniclers such as Polydore Vergil to portray the Tudors in the best possible light. For many, Bosworth symbolises the end of the medieval period and the beginning of 'modernity'.