Above: Sisters and queens. Mary I (left) and her sister Elizabeth I (right).

On this day in history, Thursday 17 November 1558, Queen Mary I of England died, probably of influenza, at St James' Palace in London. Her infamous and unsuccessful reign had lasted five extraordinary but bitter years, encompassing religious fervour, political turmoil and a greater involvement of England in international politics. Today, England remembers her by the infamous epithet 'Bloody Mary'. Her chief biographer, Professor David Loades, concedes that her reign was ultimately a 'failure'. Certainly, she has been eclipsed by her successful and brilliant younger sister Elizabeth, who succeeded to the English throne on Mary's death.

Having married Philip of Spain in 1554 - and so eventually becoming, by marriage, Queen of Spain - Mary had believed herself to be pregnant shortly after, but what eventually turned out to be a traumatic and humiliating phantom pregnancy in 1555 exposed her to scorn and left the Tudor succession in continued uncertainty. In March 1558, the year of her death, Mary expected the birth of a child, and made preparations in her will for the succession of her child to the throne of England. Nothing came of the so-called pregnancy, and by all accounts Mary had been the only person to believe in its existence. Her health began to slowly decline following that.

As both Loades and Anna Whitelock point out, from May 1558 Mary's health gradually worsened, and she suffered a fever in August. An influenza epidemic swept across London in the late autumn and claimed not only Mary's life but also that of her confidant, Reginald Pole archbishop of Canterbury. It has been conjectured that she might have been suffering from uterine cancer. On the day of her death, Mary stated that angels in the guise of children appeared to her, leading some historians to draw a tragic link between this and Mary's own strong desire to have children, a desire she never realised. She also spoke of how the word 'Calais' would be found imprinted on her heart; alluding to the national and international humiliation which England had endured following the loss of Calais, the only English stronghold in France, earlier that year, which had culminated in intensified dislike of the queen. Early on the morning of 17 November, the queen of England passed away in a lonely and abandoned court. Her contemporaries had long before flocked to Elizabeth's residence, to pay homage to the new queen.

Elizabeth was at her childhood residence of Hatfield when news of Mary's death and her subsequent accession reached her. Allegedly, although some doubt has been cast on this story, according to romantic legend Elizabeth was seated under an old oak tree, reading a book, when the councillors brought news. Sinking to her knees, she proclaimed in Latin in what has become immortalised: 'This is the Lord's doing, it is marvellous in our eyes'. Her godson, John Harington, however claimed that she actually made a speech confiding her sorrow in her sister's death and her amazement at God's decision to appoint her to the position of Queen. She asked her lords to help her in the business of ruling the country and promised her goodwill.

Mary's funeral took place on 14 December, and she was buried at Westminster Abbey, although her mother's body (Katherine of Aragon) was not moved there from Peterborough Cathedral as she had beseeched Elizabeth to do. Eventually, that tomb would be shared with Elizabeth, who died forty-five years later in 1603. The Latin inscription on the tomb translates as: 'Consorts in realm and tomb, here we sleep, Elizabeth and Mary, sisters, in hope of resurrection'. 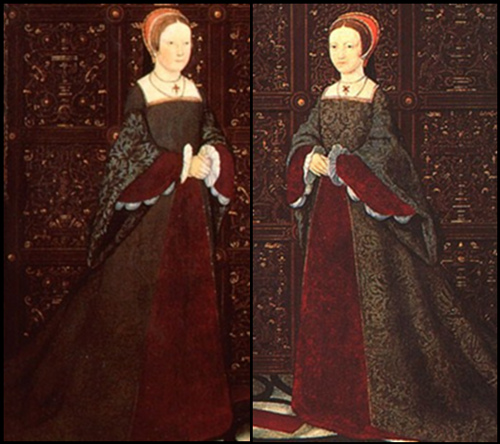 Above: Mary and Elizabeth.

Unless Lady Jane Grey is included, Mary I was England's first ruling queen. She was expected to uphold the duties of kingship, embodied in the body politic, while symbolising her position as a woman with her own natural body. Her reign had lasted five bitter years, and one might consider how different her reign might have been if only the circumstances had been different. For one thing, she succeeded to the crown aged 37, old by the standards of the day to consider a first marriage and children. She was running on little time in terms of producing a Catholic heir to safeguard the faith so dear to her heart. One might wish that Henry VIII had married off his eldest daughter in her youth, particularly because of her desire to bear children, something which, tragically, she was never able to do.

Many of Queen Mary's decisions were doubtful; most infamously, her religious policies meant she became an unpopular and hated queen in a country where religious persecution was viewed as alien and un-English. But her desire to ingratiate England to a much greater degree in Europe can be applauded. Usually known as 'the Spanish Tudor', Mary's decision to marry Philip II of Spain has often been unfairly criticised, but her desire to align England with the most powerful and influential nation in Europe should be viewed as a shrewd and positive move designed to improve her country's security and bolster its international standing. Far from being the selfish, self-centred and out of touch monarch she is usually presented as in regards to this, Mary actually demonstrated a remarkably close consideration of her subjects' needs and best interests

By contrast, Elizabeth's accession on 17 November 1558 was to inaugurate a supposed 'Golden Age'; a prosperous, successful and godly reign entirely different to that of her hated sister. But in terms of understandings about monarchy and related issues of gender, Elizabeth undoubtedly owed a great deal to her elder sister. Mary was England's first ruling queen, not Elizabeth. Mary alone shouldered that burden in a country which had never experienced female rule in so definitive a sense; something Henry VIII had worked determinedly and bloodthirstily to avoid his whole reign. By being England's second queen regnant, Elizabeth was able to fully recognise and appreciate in a shrewd sense why her sister had failed, what she had done well, and what she was able to appropriate. Celebrated for her numerous speeches, it is actually very likely that Elizabeth drew strong inspiration from Queen Mary's given speeches. Consider the speech Mary gave in the wake of Wyatt's rebellion at the Guildhall in 1554, and this will be seen to have been the case.

Queen Mary, even by the standards of her time, was still relatively young at her death - she was forty-two years of age. She reigned the shortest out of all the Tudors, sitting on the throne for even less time than that of her teenage brother Edward VI. She had come to the throne amidst great controversy, opposition and hostility, intensified in the reign of King Edward on account of her Catholic faith. Her ability to dislodge the Duke of Northumberland, and with him Queen Jane, from power speaks volumes to her sense of purpose, her determination, her courage, and her faith. She was certainly not successful and prosperous in the way her sister Elizabeth I was. But Elizabeth had what Mary always lacked during her reign: time and youth. As one historian suggests, it would be more fruitful to compare Mary's reign with the first five years of Elizabeth's reign, since comparing a 5-year reign with that lasting 45 years will, inevitably, draw unfair and unrealistic conclusions.

Sisters, rivals, enemies - the relationship between Mary and Elizabeth was complicated, devastating and psychologically unstable. To the very end, Mary fought against appointing her younger sister her successor, a woman she continued to regard as a heretic and a bastard. But with the death of Queen Mary, Elizabeth's succession was to mark a spectacular and never before seen phase in England's history, forever immortalised as the 'Golden Age'. Where Queen Mary is 'Bloody Mary', Queen Elizabeth is 'Gloriana'.
Posted by Conor at 04:27