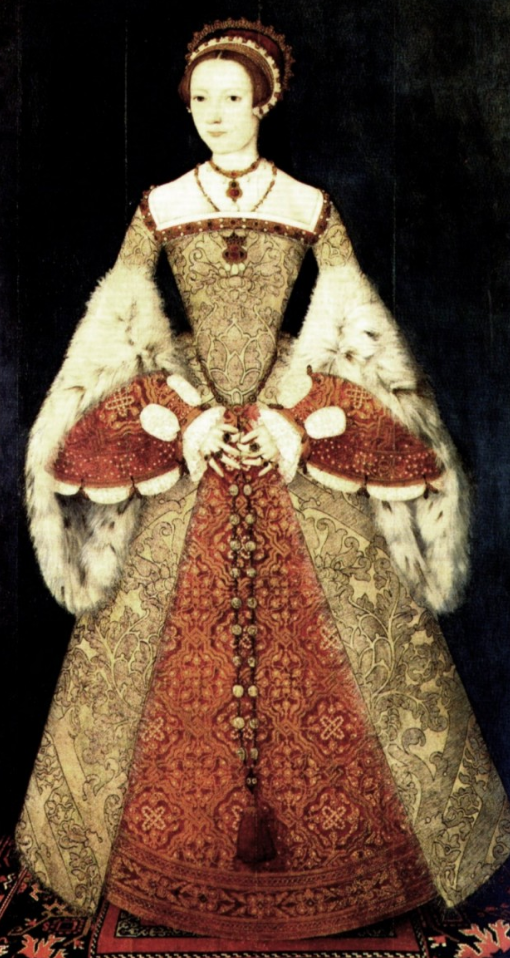 On this day in history, 5 September 1548, the former queen of England Katherine Parr died aged thirty-six at her home, Sudeley Castle, in Gloucestershire. It was a sad and tragic end to an extraordinary life and, in particular, provided a closing chapter to one woman's remarkable journey from minor gentry to queenship to comfortable nobility. Katherine's fate mirrored that of countless medieval and Tudor women: she died of puerperal fever shortly after giving birth to her first and only daughter, Mary. Tragically, her young daughter probably lived to be no more than two years old, although her exact fate is unknown.

In spring 1782, Katherine's coffin was discovered by some ladies visiting the castle. They discovered the inscription which read:
"Here lyeth Queen Katheryne Wife to Kinge
Henry the VIII and
The wife of Thomas
Lord of Sudely high
Admy… of Englond
And ynkle to Kyng
Edward VI".

Katherine was unique in many ways: she was the first Protestant queen of England, she was the first English queen to publish books, she was the most married English queen (with four husbands in all), and perhaps most fortunately, she was the only one of Henry VIII's wives to 'survive' him (although the rejected Anne of Cleves actually survived all his wives, dying in 1557, nine years after Katherine Parr). Indeed, it is this which most people tend to remember about Katherine: she 'survived' her husband. Others believe she was an old nursemaid who dutifully and compassionately attending to the ailing and irascible Henry VIII in his old age. This is very far from the truth. Katherine was an educated, principled, pious and charitable woman who also loved fine clothing and jewellery, adored dancing, had a strong romantic streak, and was kind and loving to her family and friends. She was admired during her own lifetime and has legions of admirers to the present day, including Camilla, duchess of Cornwall. In many respects, Katherine was an excellent candidate for the position of queen of England.

Biographer Linda Porter believes that Katherine's influence was particularly important with her three royal stepchildren: Mary Tudor (who was only four years younger than her), Elizabeth, and Edward. She brought them to court and established loving and close relationships with all three. Although some of Henry's other queens, namely Anne of Cleves and Katherine Howard, had also attempted to bring the royal family together, it was Katherine Parr who provided a mother figure for Elizabeth and Edward, who had been cruelly deprived of their mothers at a very early age (Elizabeth's mother was beheaded when she was not yet three, while Edward's mother had died from puerperal fever only twelve days after his birth). To Mary, who had also suffered the loss of her mother in a humiliating and dragged-out annulment battle, Katherine was a warm and supportive companion, although the two experienced a more strained relationship after Henry VIII's death and Katherine's remarriage to Thomas Seymour. 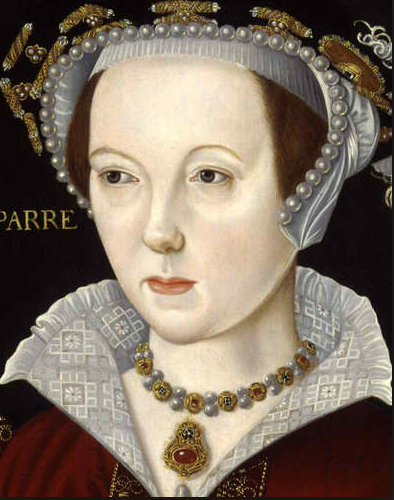 Katherine's life was truly extraordinary. Born in 1512 (historian Susan James, who published an academic study of the queen, thought that she was probably born in about July or August of that year), Katherine's family was respected northern gentry, and she appears to have been named after Katherine of Aragon who was, of course, the first wife of Katherine Parr's future husband, Henry VIII (Maud Parr, her mother, was a close favourite of Katherine of Aragon at court). She was later married for the first time in 1529 to Edward Borough in Lincolnshire, but her husband died only four years later, leaving Katherine widowed - not for the first time - aged twenty-one.

A year later her second husband was Lord Latimer, a man twenty years older than her with two children of his own. Katherine became, as with the Tudor children, a warm stepmother. She resided at Snape Castle in Yorkshire. Lord Latimer was a conventional Catholic, and historians such as David Starkey, aware that Katherine Parr later as queen developed strong reformist tendencies that we would now associate with Protestantism, have questioned whether she, too, was a traditional Catholic in these years, or whether she had already began to develop reformist ideas and beliefs that set her up in conflict to her conservative husband. The north of England was conservative as a whole, and in 1536 the most threatening rebellion of Henry VIII's reign, the Pilgrimage of Grace, occurred. Terrifyingly, Katherine herself and her stepchildren were seized as hostages in their own home. Cromwell later blackmailed Lord Latimer due to his involvement, even if unwilling, in the rebellion. Later, the couple departed for London, where they were living when Lord Latimer died in spring 1543.

Above: a family painting of Henry VIII sitting with his son, Edward, flanked by his two daughters: Mary to the left, and Elizabeth to the right. The queen who sits with Henry is his third wife Jane Seymour, although, painted as it was in 1544, his wife at that time was Katherine Parr.

Henry VIII's previous wife Katherine Howard had been executed in February 1542, and by spring 1543 the ageing king had still not remarried. At some point, he became attracted to the widowed Katherine Parr, and proposed marriage to her. Katherine felt doubt and discomfort. She appears to have been in love with Thomas Seymour, brother of the late queen Jane, at this point. But after much soul-searching, as she later admitted, she felt it was God's will that she marry the king. She perhaps also felt it would provide an excellent opportunity for her to bring about further reform within the church. On 12 July 1543, she became the sixth wife of Henry VIII at Hampton Court Palace.

While the king may not have passionately adored Katherine Parr, as he did Anne Boleyn, he does appear to have respected her deeply and to have felt genuine affection for her. Katherine, on her part, worked hard to be an effective and successful queen consort. Evidence of Henry's admiration and affection for his wife can be found in the fact that, in 1544, when he departed for France for war, he appointed her Regent. None of his other wives, with the exception of Katherine of Aragon in 1513, enjoyed this prestigious honour. Katherine was clearly ambitious. The following year, she began publishing religious works which outlined her reformist views that were bordering on the radical. Indeed, Katherine soon found herself in a position of danger when in 1546, if the martyrologist John Foxe is to be believed, the conservatives at court instigated a plot to accuse the queen of heresy. Anne Askew, who was associated with the queen, was burned at the stake in July 1546. Katherine supposedly discovered news of the plot and, falling into panic and distress, pleaded for forgiveness from the king and convinced him of her innocence. Luckily for her, she was successful.

In January 1547, the king died aged fifty-five. We cannot know what Katherine felt, but only three months later she married for the fourth time to Thomas Seymour. This may have been a love match, but perhaps the dowager queen also felt she required a helpmate and strong man to support her. Since Seymour was uncle of the new king, Edward VI, it can be argued, as Linda Porter credibly did, that she regarded marriage to him as strengthening her hand and ensuring her continuing political relevance in the kingdom. Although her stepdaughter Elizabeth and the future queen Lady Jane Grey came to reside in her household, Katherine had to battle the Lord Protector Edward Seymour, elder brother of her husband and thus her brother-in-law, for control of her dower estates.

What happened next has been shrouded in controversy, but it appears Thomas Seymour began a flirtation - some would call it abuse - with the thirteen-year old Elizabeth. Unbeknownst to Katherine, he had actually, before marrying Katherine, petitioned both Mary Tudor and Elizabeth for marriage, and later even considered marrying the nine-year old Jane Grey. Clearly, Seymour was an ambitious, perhaps even unscrupulous man, who desired greater political influence and power. What he was doing with Elizabeth cannot now be known for sure. Undoubtedly, it brought scandal to Katherine's name, and she banished Elizabeth from her household in spring 1548. Rumours circulated that Elizabeth was delivered of a child in secrecy, the offspring of Thomas Seymour.

At this time, Katherine was pregnant. At a time when most Tudor noblewomen married about twenty and, in some cases, in their teens (Katherine herself had been only in her seventeenth year when she married for the first time), Katherine, at thirty-five, was rather old to be expecting her first child. This is evident in numerous letters written by her friends and relatives, who anxiously warned her of the risks of childbirth and offered soothing and comforting messages and advice. After a difficult pregnancy, Katherine gave birth not to the much-desired son but to a daughter, who was named Mary, on 30 August 1548. Only six days later, between two and three in the morning, she herself died, only thirty-six. Supposedly, she had reprimanded her husband beforehand for his ill-treatment of her, probably referring to the scandal with Elizabeth, but this story cannot be corroborated.

Katherine Parr's end was tragic. But her life was extraordinary and deserves to be remembered, admired, even celebrated. She was a successful and diligent queen consort who brought family stability and a measure of much-needed dignity and calmness to court, following the king's previous marital scandals. For perhaps the first time, Henry VIII and his three children enjoyed, under Katherine's influence, a degree of harmony and closeness with one another. Katherine Parr was far more than merely the 'survivor' of a much-married monarch.
Posted by Conor at 02:38