23 April 1445: The Wedding of Henry VI and Margaret of Anjou 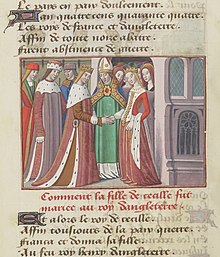 On 23 April - some sources suggest 22 April - 1445, Henry VI married Margaret of Anjou at Titchfield Abbey in Hampshire. The king was twenty-three years old and his new bride was fifteen. Margaret, who was born in Lorraine, had arrived in England on 9 April and met Henry shortly afterwards. The marriage was expressly designed to achieve peace between the warring kingdoms of England and France, although Margaret's dowry was rather unimpressive.

On her wedding day, the king provided Margaret with jewels, including a gold wedding ring. On 28 May, Margaret entered London and was crowned queen at Westminster Abbey two days later. The surviving evidence indicates that Henry and Margaret felt affection, possibly love, for one another, and the records demonstrate that king and queen cooperated on matters of policy during the early years of their marriage. However, Margaret's inability to conceive contributed to growing tensions at court and in the realm more generally. This childlessness, coupled with the perceived shortcomings of the Anjou alliance, meant that Margaret was unable to enjoy popularity among her subjects.

In 1453, eight years after her marriage, Margaret finally conceived and gave birth to a son, Edward, on 13 October. However, the birth of her child coincided with Henry VI's illness and compelled Margaret to take a politically active role at the centre of government. Her bid for the regency failed and the duke of York was made protector. As is well-known, Henry's incapacity and the ensuing crisis of kingship led to civil war.

In my book, Queenship in England - which can be purchased here - I examine Margaret's controversial tenure as queen:

Henry VI’s incapacity created a crisis at the centre of governance. Contemporaries feared the consequences of the king’s infirmity: ‘the reame of Englonde was out of all governaunce… for the kyng was simple… held ne householde ne meyntened no warres’. It is not true that the queen was an avaricious, grasping woman determined to enjoy power irrespective of the consequences; however, her husband’s collapse placed her in an ambiguous and uncomfortable position. Indeed, it was circumstances, including the collapse of her husband and growing discontent among the nobility, that required the queen to play a more directly political role after 1453, alongside her realisation that her son’s inheritance had to be safeguarded.
Posted by Conor at 04:32