International Women's Day and the Tudors

Today, 8 March, is International Women's Day. It concentrates on, and celebrates, the collective efforts of women's struggle for equality. Love and respect for women, ostentatiously, is celebrated while women's political, cultural and social achievements are recognised. The first Women's Days were held in the early twentieth century, and some observers nowadays regard International Women's Day as "redundant". Continuing inequalities persist for women. Sexual violence is rampant across the world - in South Africa, it is estimated that a woman is raped every 26 seconds while 500,000 rape cases take place in the country every year. 44 per cent of all UK women state that they have experienced physical or sexual violence since they were 15. In Egypt, 99.3% of women and girls have been subjected to sexual harassment. The customary form of insult directed against women is both sexually charged and explicitly gendered: "whore" or "slut".

Above: Anne Boleyn (portrait - left) is still often seen as a temptress who got what she deserved (right).

The Tudors didn't celebrate International Women's Day - in fact, the very notion would have been downright unthinkable. This was a patriarchal society which viewed women with contempt as lustful, empty-headed, sexually voracious inferiors who needed to be constantly controlled and regulated by their menfolk. Sexual violence, assault and murder - then as now - were pervasive at all levels of society. But the case of Tudor noblewomen and queens is especially important in demonstrating that these trends and views of women have continued to infiltrate modern society. Anne Boleyn, second and most famous wife of Henry VIII, is a clear example of this.

In a disturbing article written recently, feminist scholar Susan Bordo questioned why "the lethal, calculating social climber has been our default Anne Boleyn". Philippa Gregory's The Other Boleyn Girl famously inaugurated a perception of Anne as a malicious, spiteful and evil witch who plotted the murders of her enemies, slept with her brother, delivered a deformed child borne by the Devil and bullied and harassed anyone who crossed her path. Hilary Mantel took this one step further in Wolf Hall and Bring Up the Bodies; providing a depiction of the Queen that has been described by The Telegraph as "vile and manipulative" and The Morning Star as "so spitefully ambitious" that "one feels any king would be justified in beheading" her. This last statement is especially disturbing and unsettling. Not only is it explicitly suggested that a woman who dares to transgress accepted norms actually deserves death; but it also both presupposes, and accepts, that the real Anne Boleyn may have been very close to the modern depiction of her - in this case on stage - and so might have deserved her awful fate. Even the mostly sympathetic performance given by Natalie Dormer in The Tudors subscribes to this archetype in the first series in presenting Anne as a manipulative seductress who orders Henry to "seduce me!"

It's worth saying, as Bordo does, that actual historical evidence doesn't bear this point out. Professor Retha Warnicke, a noted Tudor historian, recently criticised Gregory for manipulating Warnicke's evidence to provide a sensationalist and controversial portrayal of Anne. As she writes: "the Anne Boleyn of The Other Boleyn Girl is not an early modern woman". Both Gregory and Mantel provide fantasies that are explicitly modern. The real Anne Boleyn would never have brazenly seduced Henry, staring at him openly in front of the court or invited him to put his hand up her dress, as in The Tudors. She was both educated and religious, and would surely have both read, and subscribed to, literature prevailing in educated culture that explicitly warned women to preserve their virtue, behave modestly, and dress circumspectly. But Anne Boleyn continues to be regarded as both the villain and the temptress who destroyed a good marriage and, whether guilty of adultery or not, deserved her death. As Gareth Russell writes: "There is a pervasive view in modern literature and history that holds that although Anne Boleyn probably was not guilty of the crimes for which she perished in 1536, she nonetheless basically deserved her eventual fate. To paraphrase a popular television show, Anne played the game of thrones - and lost. She was a game player, who deserved neither pity nor special treatment". As feminist scholar Andrea Dworkin once noted, for a woman to be "good" in our culture, she needs to conform to the same criteria set forth in fairytales: she must be like Sleeping Beauty, quiet and quiescent to the point of practically being unconscious; and the passive object of events, neither their initiator nor their agent. Because Anne Boleyn has been seen as neither passive nor quiet, she has been termed a "bad" woman who got her comeuppance.

But what is perhaps most disturbing of all is that these stereotype exists within a wider cultural perception of women as sexually aggressive and manipulative. The shocking statistics of sexual assault and rape given earlier in this article demonstrate that this belief has not resided - in fact, it remains an entrenched part of modern society. Even today, women are usually viewed as to blame in cases of sexual assault: they are usually deemed to have been "asking for it". I read an article written by a student recently which described how, following her experiences of sexual assault, she was incredulously asked by teachers why she had not sought to stop it. She was not believed and nothing happened to the culprit. Statistics indicate that 97% of rapists get away with it. 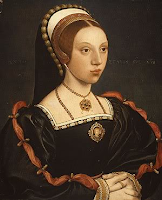 Above: Katherine Howard, fifth wife of Henry VIII and quintessential victim of the early modern culture of misogyny, patriarchy and sexual assault.

A quote is worth giving because it essentially encapsulates the premise of this article:

"Women nowadays are not supposed to be victims, it's considered somehow demeaning, but when one looks at the extraordinary misogyny of the sixteenth century and the crushing physical, emotional, biological and social burdens these women were subjected to on a daily basis... they were victims." (Gareth Russell, 2012).

Anne, of course, has not been the only Tudor woman misinterpreted, misrepresented and essentially despised because of the prevailing dictates of cultural misogyny and receptions of female sexuality. Katherine Howard is an example both of the very real physical assault and sexual abuse experienced by women, both then and now; and more pertinently of the ways in which women continue to be deemed the instigators or, at least, facilitators of these sexual encounters. When she was 12 or 13, Katherine was seduced by a musician in her step-grandmother's household who invited her to meet him in dark places, where no one else was present, and then proceeded to fondle and, I would argue, harass her. Other women in the household became extremely concerned about this musician's behaviour and sought to protect the young Katherine. It is, of course, true that girls were married off at exactly this age in the Tudor period, and notions of child abuse were completely different to the twenty-first century (some would argue the concept of childhood didn't even exist in the early modern period); but that shouldn't necessarily then mean that experiences of sexual abuse, even violence, should run the risk of being invalidated simply because they were interpreted differently in different cultures. That Katherine was unwilling there is no doubt, for she requested the musician not to go any further. When she was 15, she was probably sexually abused, even raped, by another gentleman in the household who maintained a frightening and aggressive hold over her even when she became queen.

When Katherine was executed in 1542, it was effectively accepted that she was not only guilty of the crimes for which she died but that she was a common whore who deserved never to be spoken of again. Silence surrounded her name in this culture of shame. Bordo speaks of "our default Anne" - well, one could argue that we only have one prevailing conception of Katherine Howard. Unless she's been termed a victim, as one or two historians have suggested, she is almost always presented as a promiscuous whore who cheated on an ageing husband and, like Anne, deserved her grisly fate. But if one bears in mind the continuing perceptions of female sexuality and culpability in the modern world, then it can only be imagined how much worse the situation was almost 500 years ago for these women. It was culturally and socially ingrained that these women were licentious beings who used witchcraft to seduce and emasculate men. They were viewed as followers of the Devil, and men were explicitly warned to be wary of them.

From this perspective, it becomes nonsensical to think that the documents relating to Katherine's downfall are accurate representations of what really happened. Her "promiscuity" actually derives from the language and discourse used by men and women in these interrogations to explain and account for what had happened. Not only, as Lyndal Roper notes, did early modern men and women talk about sex differently, but if women were deemed to be promiscuous and aggressive as a fundamental part of their nature, then is it any wonder that Katherine was repeatedly described as a seductress who initiated meetings with Culpeper, or who invited Dereham into her bedchamber? To me, at least, these interrogations reflect not so much the truth as the early modern culture of female sexuality and blame.

Women continue to be objectified.

Today is International Women's Day and it goes without saying that the monumental achievements of women across the world should be recognised and celebrated. But let us not forget that levels of sexual violence, objectification, and humiliation of women remains a disturbing phenomenon across the modern world. Tudor women were subjected to this on a regular basis and were always viewed as to blame. This therefore raises the unsettling question: just how far have women really come?