Why Do We Hate "The Other Boleyn Girl"'s Anne Boleyn? 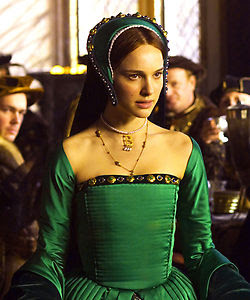 Above: Natalie Portman as Anne Boleyn in The Other Boleyn Girl (2008).
A late sixteenth-century portrait of Anne Boleyn from a lost original; artist unknown.
Were they really so different...?

Those who are serious about Tudor history often view Philippa Gregory's bodice ripper of a novel, The Other Boleyn Girl (2001), with little more than contempt, dismissing the book curtly and cuttingly. Susan Bordo, who has recently written an intriguing book on Henry VIII's infamous second wife, The Creation of Anne Boleyn, states categorically: 'many of the details, and indeed the whole premise of the book, cannot be defended as anything other than pure imagination'. Claire Ridgway, of The Anne Boleyn Files, warns her readers that 'The Other Boleyn Girl is not a factual retelling of Anne Boleyn's life or even that of Mary Boleyn... there are many, many inaccuracies in the book, along with fallacies and story-lines that have no factual basis'. The late Irene Rheinwald, a historian of Anne Boleyn, complains: 'I have no idea how this travesty was foisted upon an unsuspecting public with such extraordinary success'.

Surely it's obvious, first and foremost, that the novel is just that: a novel. It is fiction. Perhaps historians and researchers get far too worried that the general public cannot tell the difference between a novel and a serious academic study. Anyone with an ounce of sense would recognise the sheer melodrama in this book, the exaggerations, and above all the very prominent distortions. The film, of course, was even worse. But, hang on a second. Isn't The Tudors just the same - fiction? And yet that TV series has been sensationally popular amongst the general public, and has not nearly been as condemned by historians and researchers as The Other Boleyn Girl. Indeed, Gareth Russell likens it, when comparing it to Philippa Gregory's novel, to a historical documentary. But The Tudors is also rife with errors and misconceptions. At least the women in The Other Boleyn Girl dress like Tudors, which is more than can be said for The Tudors.

It is possible that historians and Tudor writers are so resentful and emotional when it comes to The Other Boleyn Girl, it will be suggested here, because the portrayal of Anne Boleyn is simply what they do not want to see, they cannot accept that Anne was ever like that. An article in The Guardian questioned why Anne was presented as nothing more than 'a scheming trollop'. Writers castigate Gregory for presenting an Anne Boleyn who is sadistic, cruel, vain, ruthless, ambitious, scheming, spiteful, arrogant, and merciless. The one-dimensional characterisation is, for many, completely unconvincing and downright insulting. Historians take serious issue with such presentations of Anne. Retha M. Warnicke, in her study The Rise and Fall of Anne Boleyn, (who ironically Gregory relies heavily on for her novel), bemoans how simple gender stereotypes and hostility towards women in the Tudor period encouraged dark portrayals of Anne Boleyn, presenting her as a murderess, witch and adulteress, which have endured to the present day.

The book has serious flaws, and writers are right to point out the numerous errors and the wild storylines. The rivalry between Anne and Mary, for instance, is certainly exaggerated and distorted; in reality, the two girls were separated as teenagers when they went abroad to serve European queens and probably had little to do with one another thereafter, until a very public fall out when Mary married beneath her in 1534. The story line of incest between Anne and George is similarly wild and inaccurate, as is the portrayal of the Boleyn family, the heavy emphasis on witchcraft and sorcery, and the suggestion that Anne was involved in poisoning her enemies.

But the simple fact is this: Anne Boleyn lived almost 500 years ago. As with all controversial personalities, every source which is concerned with her life is unquestionably biased, reflecting the author's own religious and political interests, and, above all, how they perceive women. Gender stereotypes filter to us through sources produced in the Tudor age. If one follows the Protestant tradition preserved by writers such as John Foxe, Anne Boleyn was a highly virtuous, religious, and charitable queen who was blessed by God and personally selected by Him to marry Henry VIII and lead him away from superstition and corruption embodied by the Catholic Church. She thus fulfilled God's mission in leading to the break from Rome. Capping off her sensational success, Anne then gave birth to the ultra Protestant queen, Elizabeth I. For Protestants, Anne could no wrong, and her very name symbolised virtue and goodness, although these writers carefully avoided the issues of Anne's downfall and execution on charges of adultery, incest, and treason.

Catholics, however, wrote very differently about Anne. Eustace Chapuys, Spanish ambassador at Henry VIII's court during the time of Anne Boleyn, presented a monstrous portrayal of Anne. Referring to her consistently as 'the concubine' or 'the whore', Chapuys perceived Anne to be cruel, vicious, avaricious, scheming and immoral, and held her personally to blame for the ill-treatment of her stepdaughter Princess Mary, and suspected that not only had she bewitched Henry VIII, but had also poisoned Katherine of Aragon. This tradition was preserved in Nicholas Sander's notorious account, which suggested that Anne was actually the daughter of Henry VIII (and so eventually married her own father), and presented her as physically deformed, believing her to be a witch and evil sorceress who had enchanted the King and inflicted evil on the kingdom of England through causing a schism with the Roman Church. Other Catholic writers, such as the anonymous Spanish author of The Chronicle of Henry VIII, depicted Anne as immoral and licentious, taking numerous lovers behind her husband's back. These Catholic accounts, obviously, are very similar to Gregory's portrayal of Anne in The Other Boleyn Girl.

Because of the inherent bias, the political, social and religious agendas, and the persistent prevalence of simple gender stereotypes, it is impossible to know what Anne Boleyn was like. People are rarely black and white, and so it is certain that the real woman was a lot more complex and multifaceted than either Catholic or Protestant writers allow.

It is necessary to recognise the situation Anne was in. The king first proposed marriage to her in 1527, but she only married him in 1533, six years later, aged 32. She was under extreme stress, facing European powers who personally detested her and revered Katherine, and subjected to unrelenting hostility from the English people, who insisted that she was both a whore and a witch. I am wholly unconvinced that Anne Boleyn was nothing more than the almost perfect, submissive, idealistic and wholly religious woman presented by both Protestant writers in the reign of her daughter Elizabeth, and favoured in serious historical works written by Warnicke and Joanna Denny. As Jenny Wormald rightly writes in her scathing criticism of Warnicke's book, it is quite an achievement, 'to make Anne Boleyn a bore'.

Taking into account the very real hostility and hatred directed towards powerful women in the sixteenth-century, the references in letters written by courtiers, including both Anne's cousin and Cardinal Wolsey, to Anne's 'displeasure', means that it is NOT simply Chapuys who presents a woman who clearly had a temper. While Alison Weir might be slightly overstating her case in characterising Anne as 'an ambitious adventuress with a penchant for vengeance', and David Starkey singularly exaggerating in describing Anne as a 'brutal' predator who hunted down her 'prey', the Anne Boleyn of The Other Boleyn Girl might not be as far from the truth as we might like to think.

Anne was surely not a poisoner. She did not engage in murder; she did not tempt her brother with incest; she did not inflict misery and cruelty on her sister and relatives; nor did she use witchcraft to preserve her power. These are the real problems with The Other Boleyn Girl. But, if one looks critically and sceptically at sources preserved by the likes of Chapuys, which can to an extent be supported with other contemporary sources, and if one bears in mind the very real stresses and problems which plagued Anne and took on a toll on her for over six years, it is quite likely that she could be aggressive, highly strung, cruel and ruthless.

Anne Boleyn was certainly not 'a bore'. Nor was she perfect, saint-like, in fact. But neither was she the heartless poisoner, sorceress, and adulteress preserved in Catholic works. But it is quite possible that, in terms of her personality traits, The Other Boleyn Girl's Anne is not as far from the truth as we believe.