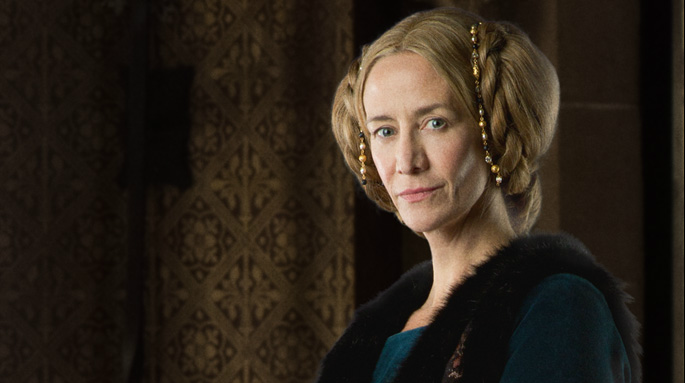 Above: Janet McTeer as Jacquetta Woodville in The White Queen (2013).
Portrait of Queen Elizabeth Woodville.

The BBC television series The White Queen, based on three of bestselling fictional novelist Philippa Gregory's novels set in the times of the Wars of the Roses, has sparked much greater interest in the extraordinary lives of royal English women who lived in context of ferocious battles, murder, bloodshed, and treachery. The TV series, of course, is horrendously inaccurate, with critics noting the appearance of zips on dresses, modern stair-rails, and quick to rage against the very modern language. I personally cannot understand why these medieval women do not wear headdresses and instead walk around dressed like prostitutes!

Queen Elizabeth Woodville, of course, was a notorious woman who was adored by her husband, Edward IV, much praised for her beauty, fairness and other qualities, but loathed by English nobles who perceived her to be arrogant, cold, ruthless, and vain. However, the life of Elizabeth's mother, Jacquetta of Luxembourg, is perhaps even more astounding than that of her eldest daughter.

Portrayed by Janet McTeer in the television series, Jacquetta had lived a life of almost unimaginable luxury and privilege before she married into the Woodville family. Perhaps born around 1416, Jacquetta was the eldest of nine children born to Pierre of Luxembourg, count of St. Pol, Conversano and Brienne and vicomte of Lille, and his wife Marguerite, daughter of the duke of Andrea. In 1433, aged seventeen, she married John duke of Bedford, who was uncle to the infant king of England, Henry VI. Thus, having been born into the European aristocracy, Jacquetta married essentially into the English royal family, cementing further her family's illustrious prestige and lineage. This marriage was not a love match, for the duke was aged around 27 years older than his new bride and had previously been married already. Instead, it was a marriage made by politics, to suit prevailing English interests in French lands at the time.

However, Jacquetta's husband John died only two years after the marriage, leaving her a widow aged 19, without children. She was, however, left extremely rich, for she was entitled to a third of her husband's lands and annuities. Just two years later, in 1437, Jacquetta married again, to her social inferior Sir Richard Woodville, who was not at all wealthy or highly ranked. Since she had, a year previously, agreed that she could not marry again without the consent of King Henry VI, she was forced to pay £1000 as a royal pardon for her transgression. This marriage clearly seems to have been a love match, for Jacquetta was willing to sacrifice her wealth, her lineage and royal connections in marrying a humble squire. Further evidence of the passionate love between them can be seen in the fact that she bore Richard at least 14 children.

Above: Were Jacquetta and her daughter Elizabeth witches, as The White Queen so controversially suggests?

Jacquetta and her new husband spent the first few years of their marriage in France, for Jacquetta was negotiating there to secure her dower lands, while Richard served there. They dwelled at Grafton, Northamptonshire, as their main English residence following their return. Their first daughter, Elizabeth Woodville, was born around 1437, and was followed by a further seven girls and seven boys, including Anthony and John. Elizabeth would prove like her mother to be extremely fertile.

In 1444, Jacquetta participated in the retinue which brought the new queen, Margaret of Anjou, to England, and it seems that the two became close friends. Jacquetta and her Woodville family were, initially, Lancastrians who supported Henry VI's regime, for the Woodvilles had been connected with the duke of Bedford, uncle to the king. However, several years later, the political and dynastic troubles which came to be known as The Wars of the Roses transformed Jacquetta's life forever. At the Battle of Towton, her husband and eldest son were arrested and imprisoned in the Tower of London, although they were later released. At this point, the Woodville family probably transferred their allegiance to the Yorkists.

Most infamously, Elizabeth, Jacquetta's eldest daughter, allegedly seduced the new Yorkist king, Edward IV, in 1464, leading him to marry her since she had, apparently, refused to become his concubine. Later stories dramatically suggested that she had held a dagger to her throat and promised to kill herself were he to attempt to use force on her. Regardless of the circumstances, Edward married Elizabeth at the Woodville's family home at Grafton on 1 May 1464, with only Jacquetta, a priest, and two gentlewomen present. This, of course, transformed the Woodville's fortunes. Jacquetta's husband became Earl Rivers and treasurer of England, while her children were married into the English nobility, causing much resentment and anger among other nobles. For instance, her 20-year old son John was, shockingly, married to Katherine Neville, the elderly dowager duchess of Norfolk, who was at least in her late 60s. Katherine Woodville married the young Duke of Buckingham, who was apparently furious, believing his new wife to be grossly inferior to himself.

Jacquetta and Elizabeth have often been linked in the public consciousness with witchcraft and sorcery. The White Queen supports these allegations, in both the TV series and in the book, by suggesting that both women engage in witchcraft to fulfil their ambitions - thus sorcery is practised to make Edward fall in love with and marry Elizabeth; to change the outcomes of battles; to wreak vengeance on enemies. Certainly, at the time rumours of witchcraft were linked to the new queen and her family. Contemporaries found it scarcely credible that their Yorkist king had married a woman so far beneath him, who had no royal blood and was, in fact, from a Lancastrian family. Richard III, brother-in-law to Elizabeth, and the Earl of Warwick both insinuated that Jacquetta and Elizabeth had inflicted sorcery on the king, rendering his marriage invalid. Thomas Wake, a Northamptonshire esquire, claimed in 1469 that Jacquetta had brought about the marriage of Edward and Elizabeth by witchcraft, having found two lead figures, one for the king and one for the queen. Jacquetta, however, when brought to trial proved her innocence and the case against her collapsed.

As with earlier medieval women such as Joan of Navarre and Eleanor duchess of Gloucester, witchcraft was often used to irrevocably damage the reputations of powerful women. There is no evidence to suggest that Elizabeth and Jacquetta were witches. Jacquetta's family was linked to Melusina, a water goddess or 'serpent woman'. However, there is no conclusive evidence to show that Elizabeth or Jacquetta strongly celebrated their links with such a legend, despite Philippa Gregory's claims to the contrary. While Jacquetta did own a copy of the ancestral romance Melusine, other fifteenth-century ladies did too, which hardly suggests that she was unique.

The main reason why Elizabeth was believed to be a witch was because other nobles could not believe that she, a mere gentlewoman of no social standing, was genuinely worthy of the king of England and had caused him to fall in love with her by natural means. Certainly, Edward's cousin and former supporter the earl of Warwick was furious, for he had been negotiating for Edward to marry a foreign princess, who was believed to be far worthier of Edward. Warwick personally resented and hated the Woodvilles, mainly because, by virtue of their relatives marrying almost all the other nobles, there were no suitable nobles left for his two daughters Isabel and Anne to marry.

The marriage between Edward and Elizabeth culminated in Warwick's defection to the Lancastrian cause, resentful of his loss of influence and power with the rise of the queen's family. He married his eldest daughter Isabel to the king's younger brother George duke of Clarence, who had become similarly angered and hostile towards his brother. Matters came to a head when Warwick left England, accompanied by his wife, his two daughters and his new son-in-law, and journeyed to visit the former queen Margaret of Anjou, promising his support of her and allegiance to the Lancastrian cause. Agreeing that his younger daughter Anne should marry Margaret's son Edward of Lancaster, a new alliance was struck up by which it was agreed that the Lancastrian king, Henry VI, should be returned to the English throne, and Edward IV forcibly removed from it.

Meanwhile, Jacquetta's personal influence with Queen Elizabeth remained firmly entrenched. She participated in her daughter's coronation, and in 1466 took part in Elizabeth's churching following the birth of her first child, the future Elizabeth of York. Misfortune overtook her, when her husband Richard and her son John were executed in 1470 on the orders of Warwick, who had returned to England in an attempt to restore Henry VI to the throne. Edward IV escaped to Europe, leaving his young wife to seek sanctuary in Westminster Abbey where, accompanied by her mother, she gave birth to the future Edward V in November 1470.

Jacquetta did not long survive the brutal deaths of her husband and son, dying on 30 May 1472, aged around 56. Where she was buried is unknown. She was an immensely powerful and wealthy woman who had been born into European royalty, marrying into the English royalty in her teens before becoming, by virtue of her second marriage, the mother of England's queen and thus grandmother of a later queen, Elizabeth of York, and great-grandmother of Henry VIII.

Rather than being a scheming and ambitious woman who only relied on witchcraft and sorcery to bring about her triumphs, it is likely that Jacquetta was, as Lucia Diaz Pascual intriguingly writes: 'a formidable woman who understood how to navigate the corridors of power and was capable of great resilience, strength, and determination to achieve her objectives'.