The Deaths of Katherine Howard and Lady Rochford 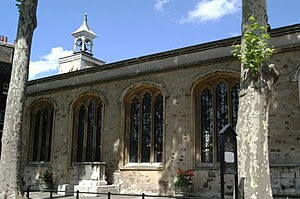 Above: the Church of St Peter ad Vincula in the Tower of London, where the bodies of both Queen Katherine and Lady Rochford were buried.

On this day in history, 13 February 1542, the teenage queen Katherine Howard and her Lady of the Bedchamber, Jane Rochford, were executed within the walls of the Tower of London on charges of high treason. The former queen suffered first, reported to be "so weak that she could barely stand or speak", but managed to make a short speech in which she admitted that her execution was just, for she was deserving of "punishment". After the axe severed Katherine's head from her body, Lady Rochford was executed, also stating that she deserved to die and exhorting the people to pray for the king. Contrary to legend, Lady Rochford did not admit her guilt in the downfall of Anne Boleyn and George Boleyn, in which she reputedly accused them of incest.

There appears to have been uncertainty among the judges as to whether or not Katherine's actions actually constituted treason. She never admitted to adultery with Thomas Culpeper, and swore that Francis Dereham had forced himself upon her without her consent. Instead, she was attainted for not having "a pure and honest living before her marriage" and desiring to return to her "abominable" lifestyle with Dereham when she employed him into her household in the summer of 1541 - actually, it is more credible that she appointed the aggressive Dereham into her household as a naive means of keeping him silent about her past. Lady Rochford was convicted for helping the queen "to bring her vicious and abominable purpose to pass with Thomas Culpeper". But as Retha Warnicke argues, and I agree with her, it is more likely that Katherine only met with Culpeper because he was blackmailing, and later manipulating, her. She was never secure as queen, surrounded by hostile and ambitious individuals who perhaps regarded her as an easy mark.

Above: Portraits said to be of Katherine are, in fact, more likely to be of Margaret Douglas.

Katherine is an enigma. We know next to nothing about her: we do not know when she was born, where she was born, her exact number of siblings, her appearance, her personality, or her personal beliefs. Indeed, the more I have researched her, the more convinced I have become that myths and legends, rather than solid historical fact, attach themselves to this queen.

Portraits said to be of Katherine (above) are probably actually of Lady Margaret Douglas, Henry VIII's niece. The prevailing depiction of the queen in modern media remains close to Tamzin Merchant's portrayal of Katherine in the Showtime series The Tudors: a flighty, not too bright bimbo who revelled in male attention, committing adultery with Thomas Culpeper while continuing to seduce and enchant an ageing king. Philippa Gregory's Katherine, in her novel The Boleyn Inheritance, similarly portrays a stupid young girl who thinks of nothing but sexual pleasure. On the other hand, Angela Pleasance in the BBC TV series The Six Wives of Henry VIII offers a darker view of Katherine as a manipulative, sadistic young woman who bullied her lovers into doing her will. 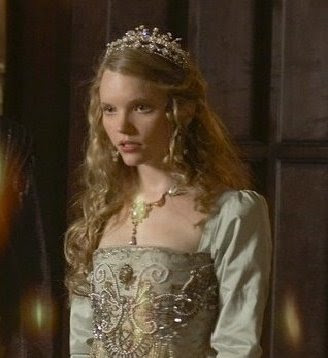 All of these portrayals might be valid, we just don't know. There is virtually nothing in extant sources about Katherine, aside from her marriage to the king and her spectacular downfall in 1541-2, culminating in the gory details of her execution. Aside from that, it's free rein, for novelists, dramatists and historians alike. I personally do not subscribe to modern views of Katherine as an idiotic, sex-obsessed 'bimbo' who committed adultery with Culpeper - I think it is a very modern, twentieth/twenty-first century reading of the situation, which does not rely on any concrete fact whatsoever. As I have already explored in my article on this blog "Misconceptions of Katherine Howard", there is no evidence that she was stupid. My book rather explores the view that she took her duties as queen seriously, acting as patron and intercessor, traditional queenly roles. She also tried to act as a good stepmother, and kindly provided clothing to the doomed Countess of Salisbury shortly before that woman's grisly execution. The fragments of detail we have about Katherine suggest a kind, good-natured young woman who nonetheless was naive, but who never experienced security as queen; manipulated as she was by devious individuals from her youth while fully aware that the king expected her to provide a male heir, something she never managed to do.

Above: Left - perhaps a sketch of Jane Boleyn, Lady Rochford.
Middle - Joanne King as Jane in The Tudors.
Right - Sheila Burrell as Jane in The Six Wives of Henry VIII.

Jane Boleyn is, similarly, an enigma. Modern scholarship has not been kind to her, and she continues to be portrayed as a sadistic, sociopathic, even insane woman who plotted the downfall of her husband George, loathed Anne Boleyn, and eagerly provided evidence of incest between the two which led to their executions. But there is no historical fact to support this, and we have no way of knowing how the downfalls of the Boleyns personally and psychologically affected her in 1536, whether she was complicit or not. Why she became involved with Katherine is impossible to determine, but Warnicke suggests - and it is possible - that Culpeper blackmailed her into allowing him to meet with Katherine, and I think this theory is credible. Certainly it makes no sense why she would have initiated the meetings on her own, and there is no evidence to suggest that Katherine instigated the whole thing. But whatever the case, Lady Rochford was to pay dearly for her indiscretions, dying alongside Katherine in February 1542.

Both women deserve respect and sympathy. It is essential to recognise that modern portrayals of Katherine and Jane in a variety of media - including literature, film and TV - are often distorted, modernised, and even simplified; they do not necessarily present an accurate depiction of these figures or of the circumstances they experienced. But after 13 February 1542, they were dead and gone, forgotten at court and probably not much mourned. It has been left to a much later age to restore these women's reputations, although many continue to regard Katherine as a promiscuous wanton and Jane as a mentally deranged sociopath. Perhaps, one day, they will be portrayed in the media in a positive light, in which historical accuracy is respected while offering entertainment.