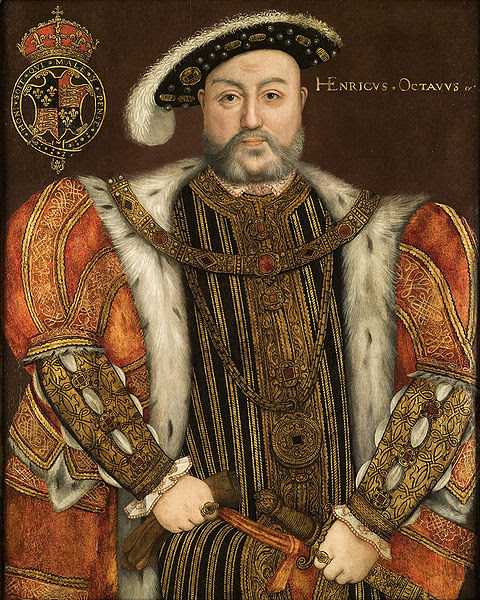 28 January was a highly significant date for the first two Tudor monarchs, Henry VII and his second son Henry VIII. It marked the birthday of the Tudor dynasty's first monarch, in 1457, and ninety years later, it would be on 28 January that Henry VIII died, ending his turbulent 38-year reign. It's perhaps a touch ironic that these two milestones occurred on exactly the same day.

Henry Tudor was born on 28 January 1457 at Pembroke Castle, the only son of Edmund Tudor, earl of Richmond, and his formidable wife Lady Margaret Beaufort, who was barely thirteen when she gave birth to Henry. Edmund had died three months before his son's birth as a result of plague, a lethal killer in late medieval and early modern Europe. Margaret devoted her whole life to promoting the cause of her son, whom she believed to be England's rightful king. Loyal Lancastrians, the eclipse of Henry VI meant that Margaret became obsessed with the idea of her son resurrecting the rightful Lancastrian line in the person of his kingship. Eventually, her ambition came to fruition, and in 1485, at the age of 28, Henry Tudor became king of England after defeating Richard III, the last Yorkist king, at the Battle of Bosworth. He took to wife Elizabeth, daughter of Edward IV, with whom he sired at least seven children, four of whom lived to adolescence (his eldest son Arthur died at fifteen). In 1509, after a reign characterised by dynastic tragedy, political instability and the threat of renewed civil war, Henry died aged 52. He did, however, successfully allow the crown to pass to his son Henry without the outbreak of pretenders laying claim to it. An uncontested succession had not been experienced in England hitherto since 1422.

Henry VIII had been born in 1491. He was extremely close to his mother Queen Elizabeth, and her death in 1503, when the young prince was not yet twelve, appears to have severely affected him psychologically. His relations with his father were, famously, less cordial, and were at times overtly hostile. In 1509, just before his eighteenth birthday, he succeeded to the throne of England, and took to wife Katherine of Aragon, the former consort of Arthur. Her inability to provide a male heir, however, and the king's passion for Anne Boleyn led him to seek an annulment of his first marriage and a remarriage to the alluring Anne. Although this indeed came to pass, it inflicted the English Reformation on the people of England and was characterised by much bloodthirst and destruction in the wake of Thomas Cromwell's reforms. Mary and Elizabeth were born to Henry by his first two wives; and Jane Seymour finally provided the king with his long desired male heir in 1537, Edward. Three short marriages followed; although the king did manage to enjoy a peaceful and fairly untroubled final marriage to Katherine Parr. In 1547, at the age of fifty-five, Henry VIII died. Despite his military shortcomings, marital disasters, and difficult political decisions, Henry has remained one of England's most enigmatic and famous kings, and was extremely popular among his subjects. His children, particularly Elizabeth, delighted in him; although Mary may have been less close to her father than her two younger siblings. Henry's death paved the way for his nine-year old son Edward's succession, who was to die, tragically, before his sixteenth birthday in 1553.

Thus 28 January was a monumental day for the Tudor ruling dynasty. It began with an extremely difficult birth in a secluded castle in Wales, endured by a thirteen-year old girl who would prove unable to bear any more children. The child's father was not absent, having died months earlier. Ninety years later, in an exceptionally different political, religious and dynastic climate in England, that king's son died at the age of fifty-five, leaving behind a controversial legacy of religious turmoil, dynastic bloodshed, and personal charisma which continues to prove irresistible to modern audiences today.