In Memory of Anne Boleyn 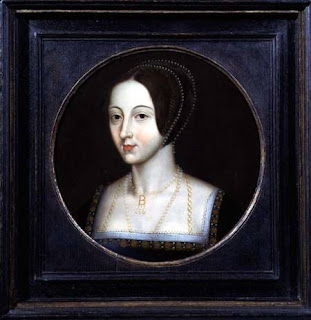 On 19 May 1536, an unprecedented event occurred in England. Queen Anne Boleyn, second consort of Henry VIII of England, was beheaded within the walls of the Tower of London, between eight and nine in the morning (sources differ), on charges of treason, adultery and incest. She was later buried within the Chapel of St Peter ad Vincula, situated near to Tower Green, the falsely alleged site of Anne's death.

Famously, Anne had only been queen for one thousand days, having married Henry three years previously. Born at the turn of the century to Sir Thomas Boleyn and Lady Elizabeth Howard, Anne had served at European courts for most of her childhood before returning to her home country in 1521/2, where she attracted the love of the king in 1526 as a vivacious, intelligent and ambitious woman in her twenties, serving in the household of Queen Katherine of Aragon. It took seven years before Anne finally became queen, only to die for alleged sexual crimes and plotting her husband's death in May 1536. She left one daughter, Elizabeth, aged only two and a half years old at her mother's death, who would become queen twenty-two years later.

Above: Princess Elizabeth, the future Elizabeth I, daughter of Anne Boleyn.

I was introduced to Anne at the age of about eleven, having read Carolyn Meyer's children's novel Mary, Bloody Mary, writing from the perspective of Princess Mary Tudor, daughter of Henry VIII and his first wife, Katherine of Aragon. Unsurprisingly, it offered a demonic view of Anne as an evil temptress who plotted Mary's death and that of her mother. My first introduction to Anne, therefore, was hardly positive; but Meyer's later novel Doomed, Queen Anne offered a fairer assessment of Anne (though hardly more accurate) as an awkward, perhaps disfigured girl who was nonetheless able to use her supreme confidence and social graces acquired at the court of France to attract Henry VIII and become his queen, only to die on false charges when his love for her rapidly turned to hate, due to her failure to bear him a son.

From these novels, a powerful fascination with Anne Boleyn developed. I soon read Jean Plaidy's beautifully written The Lady in the Tower, a novel that I would argue offers a particularly sympathetic, and fair, portrayal of Anne and which is far better written than modern books about her such as The Other Boleyn Girl or The Queen of Subtleties. Plaidy depicted her as a sensitive, thoughtful young woman who never wanted to be queen, desiring only her first love Henry Percy, betrayed by a selfish king intent on a male heir. Philippa Gregory's The Other Boleyn Girl provided a highly sexualised, captivating, if vulgar Anne who used anything - and anyone - to manipulate her way to the throne. The Queen of Subtleties, written by Suzannah Dunn, similarly presented the queen as a foul-mouthed, vulgar and ambitious woman, which is hardly convincing given the nature of Anne's luxurious childhood.

I particularly enjoyed Dorothy Tutin's portrayal of Anne in the 1970 BBC TV series The Six Wives of Henry VIII, which portrayed her as older, measured and more dignified than she is usually presented in popular culture, but which also hinted at her shrewish, insecure, and jealous nature (which may come close to the truth). Natalie Portman offered a beautiful and seductive Anne in the 2008 film The Other Boleyn Girl, but unlike Natalie Dormer's initially similar depiction in the TV series The Tudors, Portman's performance lacked gravity and conviction. Genevieve Bujold, of course, delivered a powerful, energetic and emotionally charged performance as the doomed queen in the 1969 film Anne of the Thousand Days.

Above: Natalie Dormer (left) and Genevieve Bujold (right) offered standout performances as Anne Boleyn in The Tudors (2007-10) and Anne of the Thousand Days (1969), respectively.

Anne is often depicted as mesmerising, beautiful, almost perfect in her attractions, in mediums such as The Tudors and The Other Boleyn Girl - but the real woman was very different. Although the malicious slurs of the Elizabethan Catholic recusant Nicholas Sander, charging that she was physically disfigured and witchlike, can easily be dismissed, it is apparent that Anne was not a conventional beauty. A Venetian ambassador described her thus:

"Not one of the handsomest women in the world; she is of middling stature, swarthy complexion, long neck, wide mouth, a bosom not much raised and eyes which are black and beautiful".

George Cavendish hinted that she had an extra nail on one of her hands, but hardly a sixth finger, as Sander states. It was not, however, Anne's physical appearance that attracted Henry VIII, and other male courtiers. It was her captivating, vivacious and compelling personality, her sophistication, her charm, her charisma, in short. Intelligent, cultivated, educated, and opinionated, Anne stood out amongst the other ladies at both the French and English courts. Perhaps this is something still difficult for people to believe today: that for a woman to be attractive, she does not need to be physically beautiful. It can be her personality that makes her so. 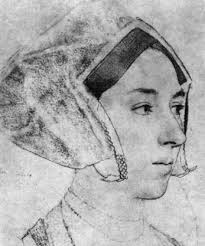 Above: often depicted as visually stunning in films, TV and novels, the real Anne Boleyn might not have been so physically perfect, as these three purported portraits of her make clear.

Anne has rightly been called by her eminent biographer, the late Eric Ives, 'the most influential and the most important queen consort in English history'. This is a fair claim to make, given her powerful religious role and involvement in the English Reformation, her charitable activities, her part in the divorce (what Ives calls 'the most shattering marriage break up in history'), her role as patron, to name but a few. It is surely Anne's tragic death, however, that has made her so famous across the world. Few historians, with the exception of G.W. Bernard, today believe that Anne was truly guilty of the crimes she was alleged to have committed. If she was, as seems likely, in truth innocent of these crimes, then her death was nothing short of legalised murder. She was executed in what was a gross miscarriage of justice. But Anne was to triumph. Calm, dignified, resigned, and yet still beautiful, elegant, and mesmerising on the scaffold, as she had been throughout her life, Anne triumphed by virtue of her daughter Elizabeth's succession to the throne in 1558, to begin a glorious reign that lasted 45 years, a triumph that few could have foreseen in 1536. On this day in history, 19 May, we should remember the life of this incredible and inspiring woman, who was killed so brutally and so unjustly within the Tower. To Anne Boleyn, queen of England, RIP.

Above: a legend in her lifetime, an enduring icon. Queen Anne Boleyn.

I admire this woman for her resourcefulness, her courage, her driving will, her ambition, her loyalty, her intelligence, her piety... Above all, she was a complex, two-dimensional and multifaceted human being, a concept which so many people still seem to struggle with. I have not found anyone in history who fascinates me as much as Anne Boleyn. I think she was an absolutely incredible woman who achieved things others could only dream about. She was cut down cruelly and unjustly in the prime of her youth, who knows how much longer she could have lived and how much more she could have achieved. I think her continuing legacy speaks volumes about her as a person, and I hope she has achieved the peace in death she was denied so cruelly in life, whether by the suspicion of her husband, the pressures of her position, or the slanders of court gossips and the nation at large. She has been so maligned and misrepresented even nearly five hundred years on. I admire Anne Boleyn and I congratulate her for everything she achieved in her inspiring life. RIP the Queen! 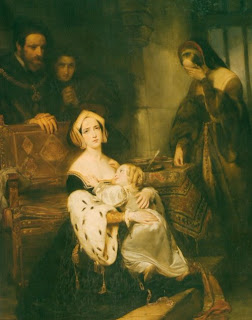 Above: a portrait of Anne Boleyn and her daughter, the infant princess Elizabeth, shortly before Anne's arrest. Anne's daughter would eventually become queen twenty-two years later.
Posted by Conor at 11:13