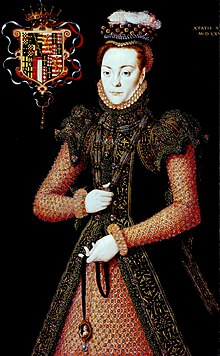 Above: A portrait thought to be of Lady Margaret Stanley, countess of Derby or her mother Lady Eleanor Brandon.

In recent years there has been an explosion of interest in the Elizabethan succession and, in particular, the extraordinary lives of Lady Jane, Catherine and Mary Grey. These women were, according to the will of Henry VIII, to inherit the throne of England in the event that Elizabeth I died with no heirs. Lady Jane was executed in 1554 for her role in seizing the throne unlawfully from the rightful queen, Mary I. As is well known, the fearful Elizabeth reacted furiously to news of the clandestine marriages of Catherine and Mary, and punished them both accordingly. Both Grey sisters were imprisoned, and Catherine's two sons by Edward Seymour, earl of Hertford, were declared illegitimate. Both sisters died fairly young, even by the standards of the time (Catherine was twenty-seven and Mary thirty-three). Their lives were undoubtedly highly tragic, but the public at large regarded the Greys as the rightful successors to Elizabeth, particularly in the wake of intensified concerns regarding Mary Queen of Scots.

After the deaths of Jane, Catherine and Mary, and the bastardisation of Catherine's sons, Elizabeth I's heir was, according to Henry VIII's will, Margaret Stanley, countess of Derby. The countess has received far less attention, both from academic historians and popular writers, regarding her role as a claimant to the English throne. However, Margaret's life was every bit as tragic, as tumultuous and as unpredictable as that of her Grey cousins. 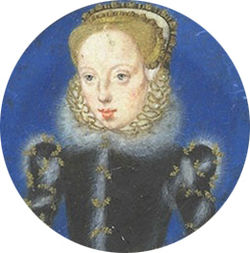 Margaret was the daughter of Lady Eleanor Brandon, who was in turn the youngest daughter of Mary Tudor and Charles Brandon, duke of Suffolk. Eleanor was Henry VIII's niece and granddaughter of Henry VII. Her daughter Margaret, therefore, was Henry VIII's great-niece. She was born in 1540, the same year her cousin Catherine Grey was born. Her mother had married Henry Clifford, earl of Cumberland. He came from a respected northern family and the union between Brandon and Clifford meant that Margaret Stanley grew up amidst considerable luxury and wealth. Until her mother gave birth to a son, she was heiress to the Cumberland title. Eleanor did give birth to two sons, Henry and Charles, but both died in childhood.

From an early age, Margaret was educated to view herself as a most important lady. She would have been proud of her position as Henry VIII's great-niece. Her cousins Jane, Catherine and Mary Grey were erudite, educated and opinionated young women, and like them Margaret was aware of her important position within the Tudor dynasty. There is no surviving evidence that her parents provided her with as remarkable an education as that enjoyed by her cousins, but undoubtedly she would have been brought up with skills regarded as fundamental in Tudor gentlewomen: needlework; embroidery; dancing; music; hunting; good manners; reading; and writing.

When Margaret was seven years old, her mother died. That was a tumultuous year, given that Henry VIII also died at the age of fifty-five. Margaret first came to play an important role in political events in 1552, when the Duke of Northumberland proposed that the twelve-year-old marry his youngest son Guildford. The marriage came to nothing, and Guildford instead married Margaret's sixteen-year-old cousin Jane Grey. There were later rumours voiced at court that Margaret was to marry instead Northumberland's brother Andrew, but again the match came to nothing, perhaps because Margaret's father had voiced opposition.

The year 1553 was a turning point for Margaret and her family. The young Edward VI had died while still a teenager. The determined king had refused to countenance the possibility of either of his sisters succeeding him, because he believed that both were illegitimate. Instead, he willed the crown to go to the heirs of Lady Jane Grey. Because Lady Jane had not yet given birth to children, she herself became queen upon his death. Margaret's cousin was now first lady in the land. However, she was dethroned and executed seven months later by Mary I.

How Margaret felt about her cousin's brutal execution is unknown, but it is possible that she did not give much thought to it. Five days earlier, the fourteen-year-old had married Henry Stanley, earl of Derby. It was a highly significant marriage. Stanley, who was nine years Margaret's senior, was a kinsman of Queen Anne Boleyn and Queen Katherine Howard (his maternal grandfather was Thomas Howard, duke of Norfolk). The marriage took place at Whitehall and was attended by Queen Mary. The couple seem to have experienced a volatile marriage, for the countess later confirmed that there were 'breaches and reconciliations' between herself and Stanley. They had four children together: Edward, Ferdinando, William, and Francis.

Above: Henry Stanley, earl of Derby, husband of Margaret Clifford.

How Margaret regarded her dynastic position during the reigns of Mary I and Elizabeth I cannot be known with certainty, but she was surely aware that she had a strong claim to the throne if her cousins Mary and Elizabeth died without heirs. During these years, the countess occupied an important place at court, although she spent much of her time on her estates in childbirth. In the early 1560s, however, Margaret's life was changed forever.

Her cousin Catherine Grey clandestinely married Edward Seymour, earl of Hertford, in late 1560. Hertford was of royal blood (he was the nephew of Queen Jane Seymour and son of the Lord Protector). Catherine subsequently fell pregnant, and was forced to inform Elizabeth I of what had happened. The queen was understandably furious: not only were her councillors pressuring her to name a successor in the event that she did not marry and provide an heir herself, but she seems to have personally disliked and feared Catherine. Elizabeth was well aware that Catherine was regarded by English Protestants (and some Catholics) as her heir, and in falling pregnant Catherine had strengthened her claim. The irate queen ordered her cousin's imprisonment in the Tower of London, and her husband was recalled from Europe and incarcerated there as well. The stricken Catherine, who was only twenty-one, gave birth to their first son Edward at the Tower in the autumn of 1561.

Elizabeth never forgave Catherine. She almost certainly remembered the treachery of the Greys in the reign of Mary I, and she remembered that she had been a figurehead for rebellion during her sister's reign. Elizabeth viewed her Grey cousins with suspicion and fear, and was determined to prevent their succession in the wake of her death. Catherine remained under house arrest at a succession of different houses until her untimely death in January 1568 at the age of twenty-seven, leaving two young sons and a bereaved husband. Only a few years previously, Catherine's younger sister Mary had also been incarcerated for her clandestine marriage to Thomas Keyes, a Sergeant Porter. With her disgrace and death in 1578, Margaret Stanley's dynastic importance increased tenfold.

According to Henry VIII's will, Margaret Stanley was her cousin Elizabeth's heir. Despite the urgent entreaties of her Privy Councillors and her own passionate love for Robert Dudley, earl of Leicester, Elizabeth refused to marry. Historians have endlessly debated about the reasons behind her decision. Undoubtedly these reasons were political, psychological and personal. Regardless, Elizabeth's decision not to marry caused considerable uncertainty in England about who would succeed upon her death. Margaret's great-uncle, King Henry, had nominated her as her cousin's heir, and it is entirely likely that, by the late 1570s, the countess had began to view herself as a possible future Queen of England.

Above: Mary Queen of Scots, Lady Margaret Stanley's kinswoman and potential rival claimant. Some historians have suggested that Queen Elizabeth always preferred the claim of the Scottish queen to the claim of the descendants of Mary duchess of Suffolk.

However, any potential ambitions for the crown that Lady Margaret had were to remain unfulfilled. The countess landed herself in deep trouble and caused her own ruin through her rash actions. In 1579, just a year after the death of her cousin and potential rival Lady Mary Grey, Margaret was accused of sorcery and arrested. She had allegedly used sorcery to predict how long Elizabeth would live, and there were even rumours that she had plotted to poison her cousin. Furthermore, she had allegedly spoken out about the queen's proposed marriage to the Duke of Alencon because it threatened her own position as Elizabeth's heir. Like her cousins Catherine and Mary Grey, the countess was punished with house arrest. Her fellow accused William Randall, whom the countess claimed was her physician, was executed. No charges were brought against Margaret, but she was banished from court. She wrote highly emotional letters to Elizabeth, claiming that she was in a 'black dungeon of sorrow and despair'. If she hoped for forgiveness and a return to royal favour, she was to be sorely disappointed.

In 1596, Lady Margaret died at the age of about fifty-six. Her sons Edward and Francis had died in childhood, and her second son Ferdinando, who had inherited the earldom of Derby, had died two years earlier. Ferdinando's son, Lady Anne Stanley, was Margaret's heiress presumptive upon the countess's death. The will of Henry VIII stipulated that Anne Stanley was Elizabeth's heir following the death of her grandmother Margaret, but the queen preferred the claim of Mary Queen of Scots' son James VI, and upon her death in 1603 James duly became King James I of England.

Much of the life of Margaret Stanley, countess of Derby, remains shadowy and elusive. It is not difficult to understand why historians have focused their attention on her Grey cousins, because greater evidence survives for their lives, and their status as claimants to the throne was more viable than Margaret's claim. It is usually forgotten that, upon the death of Mary Grey in 1578, Margaret Stanley was heir to the throne according to the will of Henry VIII. Her disgrace in 1579 seems to indicate that she was a highly ambitious woman who was determined to enforce her claim as Elizabeth's heir. Realising that her cousin would never marry and give birth to heirs, Margaret seems to have hoped and dreamed that she would one day become Queen herself. It was not to be. The disgraced countess never recovered her place at court, for she had invited the suspicion and hostility of Queen Elizabeth, who was never particularly warm towards the descendants of Mary, duchess of Suffolk at the best of times. The queen's antipathy to her Brandon kin was demonstrated in her decision to appoint Mary Queen of Scots' son James her successor upon her death, rather than Margaret Stanley's granddaughter Anne Stanley, despite the fact that Anne was, according to Henry VIII's will, the rightful heir.