The Death of Lady Catherine Grey

Above: Portrait of Lady Catherine Grey and her son Edward Seymour.

Even by sixteenth-century standards, the demise of Lady Catherine Grey, countess of Hertford, was tragic. On 27 January 1568 (some sources suggest the 26th), the middle daughter of the disgraced Henry Grey, duke of Suffolk died at Cockfield Hall in Suffolk at the age of twenty-seven. There has been considerable speculation about the cause of the countess' untimely death. Some have suggested that she died of tuberculosis (then known as consumption), while others have speculated that she had starved herself to death. Whatever the cause, Lady Catherine's death was greeted by her cousin Elizabeth I with relief, perhaps even joy, for it removed a serious threat to Elizabeth's throne.

In many respects, Catherine was a victim of her inheritance. Her mother was the daughter of Mary Tudor, queen of France, and niece of Henry VIII. Catherine was therefore Henry's grandniece and was probably named for his fifth wife, who married Henry in 1540 (Catherine Grey was born in August of that year). In 1553, at the age of only twelve, Catherine's world fell apart. Her elder sister Jane was nominated heir to the throne by their cousin Edward VI and, following his death in July, Jane was proclaimed Queen of England. Few accepted her accession, however, and Jane's regime collapsed when Mary Tudor successfully claimed the throne. Jane was imprisoned alongside her husband Guildford Dudley, who like her was probably no more than sixteen or seventeen years old. Queen Mary refused to order her cousin's execution despite considerable pressure from the Spanish envoys. However, following the outbreak of rebellion in early 1554 - motivated in large part by antipathy to the queen's proposed marriage to Philip of Spain and the anticipated restoration of the Catholic religion - Mary decided to have Jane and Guildford executed. Catherine's father Henry Grey followed Jane to the scaffold eleven days later, following his treasonous involvement in the rebellion.

Catherine, therefore, had suffered considerably by her early teenage years. Her father and sister had both died a shameful death, and she would have grown accustomed to her position as the member of a traitorous family. Popular history has portrayed Catherine's mother, Frances, as a tyrannical, cruel woman who bullied her daughters; however, there is no evidence of this, and it seems that both Catherine and her younger sister Mary were close to their mother. Frances died in 1559, a year after Elizabeth I came to the throne. 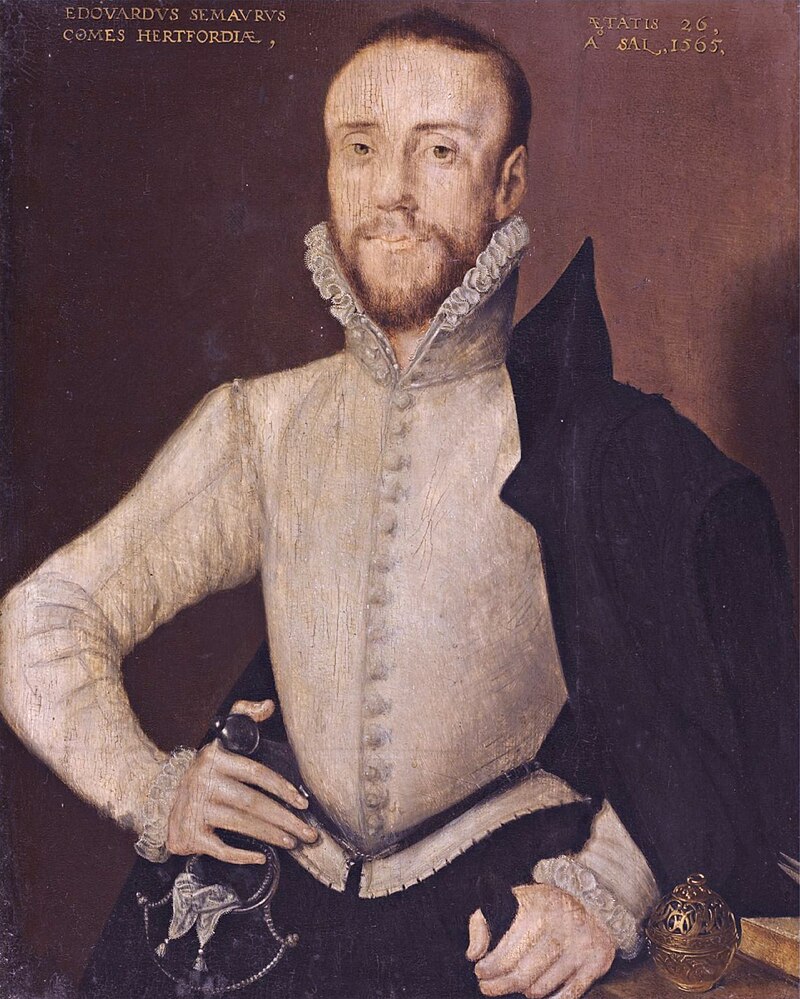 Above: Edward Seymour, earl of Hertford.

Elizabeth's accession complicated Catherine's life. According to Henry VIII's will, Catherine was Elizabeth's heir presumptive and, given the queen's unwillingness to marry and have children, Catherine stood a very real chance of becoming Queen. This fact was not lost on English Protestants, many of whom placed their hopes in Catherine and looked to her as their future monarch. Foreign rulers were also interested in Catherine, including Elizabeth I's former brother-in-law Philip of Spain. Rumours circulated that Philip was intending to have Catherine spirited abroad and married to his son.

These rumours were regarded with fear and resentment by Queen Elizabeth. Some historians have speculated that she personally disliked Catherine. Undoubtedly she feared her as a potential claimant to her throne, and the queen would never have forgotten that her brother had disinherited both herself and her half-sister Mary in preference for the Grey claim. In 1561, Elizabeth found herself with an opportunity to prevent Catherine ever becoming queen.

The following year, Catherine had secretly wed Edward Seymour, earl of Hertford. The couple were passionately in love, and their testimony graphically described their lovemaking in different palaces. However, unfortunately for the couple, the only witnesses to their marriage were either dead (Hertford's younger sister, Lady Jane) or disappeared (the priest who performed the service). This meant that the legality of the marriage could not be proved. Catherine, who was forced to confess that she was pregnant, was incarcerated in the Tower of London. Her father and sister had both died there only seven years earlier. Elizabeth also ordered the imprisonment of Hertford, and both he and his wife were rigorously interrogated. Their marriage was declared invalid and, when Catherine gave birth to a son, Edward, on 24 September, the child was declared a bastard. Elizabeth was determined that Catherine should not succeed her as queen. Her fear and loathing only increased when the countess gave birth to a second son, Thomas, in 1563.

Above: Cockfield Hall, where Catherine was imprisoned and later died.

Catherine remained imprisoned for the rest of her life. Elizabeth never forgave her, although her husband was later received at court. The queen's actions appear cruel and merciless to us today, but her actions are understandable when her fears are given attention. Elizabeth had been the subject of many plots in Mary I's reign; disaffected traitors had plotted to incarcerate, or even assassinate, their monarch and install Elizabeth as queen instead. Now, Elizabeth feared that the same threat would befall her. She reacted aggressively, as she was to react when Mary, Queen of Scots became a figurehead for Catholic disaffection among English subjects.

In her isolation, Catherine succumbed to despair and depression. She never saw her husband and sons again, and her household voiced concerns that she would kill herself in her misery. Following her death in January 1568, she was buried at Yoxford, although her remains were subsequently interred at Salisbury Cathedral. Later, her husband Edward Seymour was buried alongside her. The Latin inscription celebrates the couple as 'Incomparable Consorts Who, experienced in the vicissitudes of changing fortune At length, in the concord which marked their lives, Here rest together'.

Although her subjects could understand Elizabeth I's actions, that did not mean that they all agreed with her. Evidence suggests that many believed that Catherine and Edward were legally married and their children were legitimate. In view of this, English Protestants continued to regard Catherine Grey as the rightful heir to Elizabeth's throne and, following Catherine's death, they argued that the throne should pass to her sons Edward and Thomas. The MP John Hales was imprisoned for writing a tract that proclaimed the marriage was legal. Those who did not wish to see Mary, Queen of Scots as queen of England argued that Catherine's son Edward should succeed Elizabeth following her death. Finally, in 1606, the marriage of Catherine and Edward was declared valid, in the reign of James I.